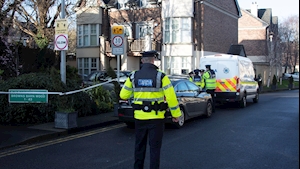 A woman in her 30s has been arrested following a fatal stabbing in Dublin.

The stabbing occurred earlier this morning, at around 7am, in the Brownsbarn Estate, Kingswood area near City West.

A garda spokesperson said a man in his late 20s “received fatal injuries” in the incident and his body remains at the scene.

The Garda Technical Bureau is currently at the scene and the State Pathologist has been informed.

Gardaí said the woman has been arrested on suspicion of murder and is currently detained in Clondalkin Garda Station under Section 4 of the Criminal Justice Act, 1984.

Gardaí said they are investigating all the circumstances surrounding the fatal stabbing as there is no known motive at this time.

In a statement, they said: “Gardaí are appealing to anyone who was in the Brownsbarn Estate and Kingswood area between the hours of 6am and 7am today 25th February 2020 who may have information in relation to this incident to come forward.

“Gardaí are particularly appealing to road users who may have camera footage.”

Gardaí are attending the scene of a fatal stabbing incident in Dublin.

The incident occurred at Brownsbarn Estate, Kingswood near City West.

Gardaí said it happened in the early hours of this morning, at around 7am.

Gardaí stated that it is understood from initial enquiries that a man was injured. They said it is believed he received serious injuries.

It has since been reported that the man has died.

The area has been sealed off for a technical examination.

Britain’s drinking water birds have declined by a QUARTER in 10 yrs because of...

J.K. Rowling launches Harry Potter At Home for kids and parents on lockdown

Wales innomin - April 2, 2020
0
J.K. Rowling has announced the news we all need to hear right now. The author is spreading some magic during...

Britain’s drinking water birds have declined by a QUARTER in 10...