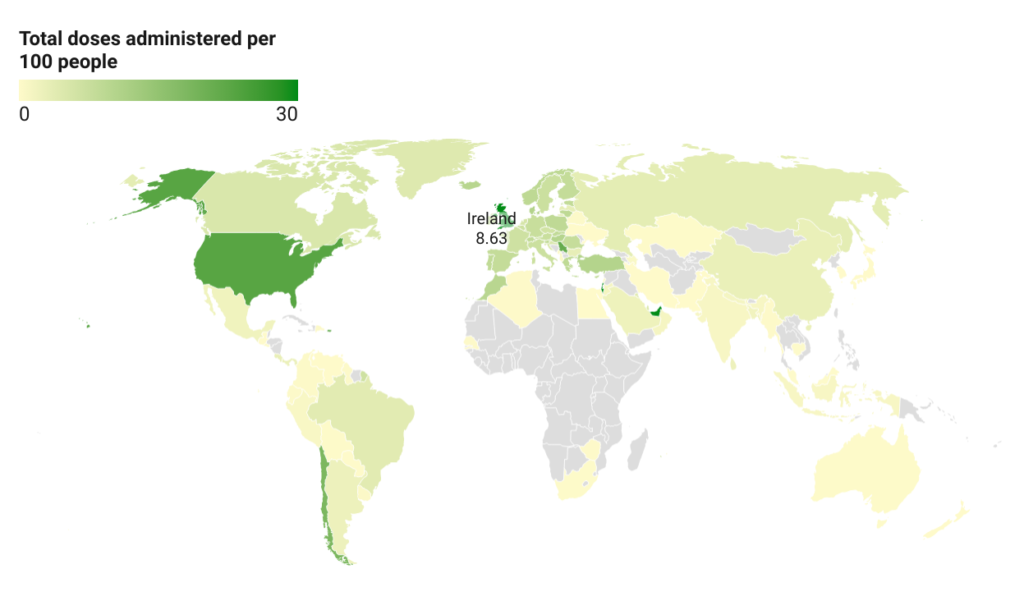 Almost 300,000 people in the Republic have received at least one dose of a Covid vaccine, the latest figures show.

More than 50,000 people aged over 70 (Cohort 3 in the vaccine priority list) have received their first dose.

Vaccinations have now been extended to people aged 60 to 64 in Northern Ireland.

The update means that almost 6 per cent of the Republic’s total population has received at least one dose of a coronavirus vaccine, compared to just over 28 per cent in the North.

As of March 2nd, the latest available data showed Ireland had the eighth highest vaccination rate in the European Union, behind Malta, Denmark, Hungary, Lithuania, Poland, Greece and Cyprus.

The UK, Serbia, Turkey, Iceland, Norway and Switzerland have also administered more vaccines per head of population than Ireland.

In absolute numbers, Germany is the EU country with the most doses administered, with 6.4 million given out.

Globally, the United States has given the most doses overall, with almost 77 million, while China has administered 40.5 million.

Israel, the United Arab Emirates and the UK top the global list when the figures are broken down by population, with 95, 61 and 31 doses administered per 100 people respectively.

Meanwhile, Austria and Denmark have broken ranks with the EU to form an alliance with Israel to produce second-generation vaccines against mutations of coronavirus.

A growing number of other EU countries have also placed side orders for doses of vaccines from Russia and China, even though the European Medicines Agency has yet to rule on whether they are both safe and effective.

Slovakia on Monday ordered 2 million doses of Russia’s Sputnik V vaccine. It expects half to arrive this month as it looks to step up vaccinations amid a surge in Covid-19 infections and deaths.

Hungary, meanwhile, has taken delivery of a vaccine developed by China’s Sinopharm, with prime minister Viktor Orban announcing on Sunday that he had received the shot. – Additional reporting: Reuters