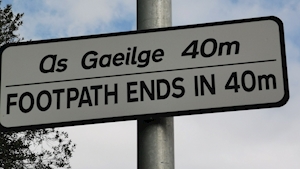 Wexford County Council were forced to step in to remove a ‘mysterious’ sign on Saturday.

Members of the public noticed the odd near the N11 at Ferrycarrig as the Irish translation was completely off.

I think you’ve lost something in translation here @wexfordcoco 🤔 pic.twitter.com/fncYQxMiei

This is where the plot thickens as the sign was brought to the attention of the county council, who claimed it was not put up by then.

It has since been removed but there is still no information on who put the sign up.