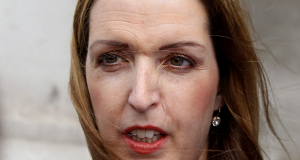 Comments on the social media platform – led by an academic who recently published a book – labelled one of the cancer therapies she uses as ‘pseudo science’.

And she was also referred to as a ‘celebrity patient’ and accused of spreading ‘misinformation’ about hyperbaric oxygen therapy.

It is a form of therapy that involves breathing pure oxygen in a pressurized room or chamber.

It is an established treatment for decompression sickness and is also used to relieve the symptoms of serious infections, bubbles of air in the blood vessels.

According to the Mayo Clinic in the US, it is also used to help with wounds that won’t heal as a result of injuries from radiation.

Mrs Phelan, who has terminal cancer and uses a range of treatments and therapies she finds suit her, has been using the therapy three days-a-week.

In May 2018, she told her Twitter followers, “it’s helping in my fight against cancer”.

But Dr David Robert Grimes, author of a book which explores medical misinformation and how trust in experts has fallen, asked: “What’s the correct etiquette for when a high profile national hero pushes dangerous pseudoscience?

“Asking for a friend (and) my sanity, as I would really prefer not to get the inevitable hate for calling it.”

An hour later, he tweeted: “… apropos of nothing, hyperbaric oxygen therapy should not be advocated for conditions for which it is devoid of efficacy, (and) comes with risk of harm.

“It is not certainly not a cancer treatment, & can cause active damage. Please take medical advice only from your physician.”

… apropos of nothing, hyperbaric oxygen therapy should not be advocated for conditions for which it is devoid of efficacy, & comes with risk of harm. It is not certainly not a cancer treatment, & can cause active damage. Please take medical advice only from your physician.

His comments led to a lengthy exchange among those who support Mrs Phelan and those who used the opportunity to criticise her.

Supporters sprung to the 44-year-old mother of four’s defence.

Commenting on how Mrs Phelan has not ‘pushed’ supplementary treatments, she tweeted: “I would disagree on that not for cure perhaps but recommendation for any cancer patients to try is irresponsible advice combined with statement on perceived efficacy for her, adjunctive treatments can at best be harmless but are also known to cause real harm in some instances.”

A short time after the debate started, Mrs Phelan shut her account, which was followed by 22,400 people, down.

Health campaigner Stephen Teap, whose wife died after her cancer was missed, told Twitter: “Many times I’ve highlighted the importance of medical professionals and patients working TOGETHER for better healthcare system.”

However, he said, Dr Grimes’ tweet the previous night ‘is an example of the opposite of that’.

And addressing him directly, he said: “This isn’t your finest hour and you didn’t even have the balls or respect to use Vicky’s name, poor!’.”

Ireland innomin - January 27, 2020
0
Fine Gael’s approach to the 2020 election campaign has been dismissed as “project fear” by the party’s lead opponents, who have described it...