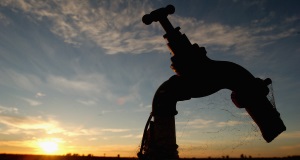 LATEST: Irish Water has said it will be very challenging to lift the boil water notice affecting 600,000 people in Dublin, Kildare and Meath today.

The utility said it would continue to work with Fingal County Council in an effort to remove the notice as soon as possible.

Irish Water said the results of two samples taken at the plant have been satisfactory. The Environmental Protection Agency will carry out an audit of the Leixlip plant this morning.

General manager of Irish Water Eamon Gallon said: “We will work to get (the boil water) notice lifted as soon as possible, and ideally before the weekend.”

EARLIER:Environmental watchdog to carry out audit on water plant at centre of boil notice

The Environmental Protection Agency will carry out an audit of the Leixlip plant at the centre of a major boil water notice this morning.

More than 600,000 people in Dublin, Kildare and Meath are affected.

Irish Water says the results of two water samples it had taken have been satisfactory. However, a boil water notice remains in place for all customers supplied by the Leixlip Water Treatment Plant.

The notice will not be lifted until the HSE and the EPA sanction its removal.

Around 600,000 people are affected in parts of Fingal; Dublin City Council; South Dublin County Council; parts of Kildare and Dunboyne in Meath.

Earlier this week, the EPA’s environmental enforcement office director Dr Tom Ryan called for greater powers to be given to the EPA to force Irish Water to act on its safety recommendations after previous public health warnings failed to be acted upon.

Speaking to TDs during a lengthy Oireachtas housing committee meeting on Tuesday, Dr Ryan said while the EPA told Irish Water in March of the need to introduce a “fail-safe” shut down of a plant in an emergency, this was not done. Dr Ryan said

As a result, he said the issues involving the Leixlip water plant and the current boil water notice were allowed to occur, an issue Dr Ryan said was avoidable. He said the EPA believed this was a genuine error by Irish Water rather than a deliberate decision by the utility to ignore the EPA’s advice.

Man due in court after shots fired at gardaí in Cork

Ireland innomin - July 5, 2020
0
Agriculture Minister Barry Cowen says that he has no outstanding driving offences on his licence after admitting to a "serious lapse of judgement"...

Ireland innomin - July 5, 2020
0
Additional reporting by Conall O Fatharta and Greg MurphyTwo men have died in a diving incident in Co Tipperary. The tragedy unfolded at the...