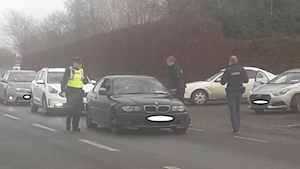 A number of vehicles have been seized in Kildare, Meath, Laois, Offaly, Westmeath and Wicklow. after gardaí carried out checkpoints under Operation Thor in over a dozen districts in the Eastern Region.

These high visibility patrols and checkpoints will have prevented burglaries and disrupted the movement of travelling criminals, according to gardaí.

A disqualified driver was also detected driving at Kilcoole in Co Wicklow.

Also this weekend, a two day Operation Thor blitz was conducted in the Bray District on November 29 and 30. This operation included arrests and community engagement, a garda spokesperson said.

In total 15 checkpoints were conducted, 38 patrols, six vehicles were seized under Section 41 Road Traffic Act and a number of searches were conducted.