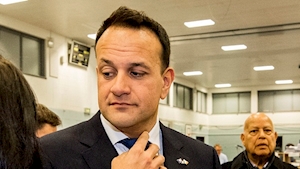 There will be no “free money” to help Ireland recover from the economic fallout from Covid-19, the Taoiseach has warned.

Speaking in the Dáíl today, Leo Varadkar said that he stood by the Government’s “slow and steady” approach to reopening the economy, but said that there may need to be widespread borrowing to help Ireland recover.

Mr Varadkar said that this challenge would be different to the financial crisis of a decade ago because Ireland was not “locked out” of financial markets.

“On the upside, we have not been shut out of the money markets as we were 12 years ago, and at least in part due to the policies of the outgoing Government and the Government that preceded it, we retain the confidence of the European institutions and capital markets.

“I am concerned that there is a growing belief that we can as a country borrow cheaply forever and that this is the solution to all our problems. This is the “free money” argument and it is coming from the right as well as the left. There is, however, no such thing as free money. Borrowed money, debt, has to be serviced, that is, the interest on it must be paid every year. This will be a new and recurring charge on our public finances and it will have to paid.”

Taoiseach Leo Varadkar says Ireland will not be able to borrow cheaply forever and that ‘there is no such thing as free money’ | https://t.co/IkvIhxqJEw pic.twitter.com/flRn3nFy0B

Mr Varadkar said that he was not comfortable with the idea of refinancing to push the debt further down the road.

“Some will say this does not matter because it is a problem for someone else in ten, 20 or 30 years’ time. I do not agree with that attitude. That someone will be us or, if not us, our successors, children and grandchildren. “

Fianna Fáil leader Micheál Martin said that while the economic impact was “unprecedented” but said that there must be a public sector bailout.

“The overwhelming feedback we are getting from the small and medium enterprise, SME, sector is that there has been no response to the core crisis they are facing, and this is particularly true of the domestic non-exporting SME sector, along with the firms that are exporting.

“Our public sector must be treated fairly too. We cannot allow public companies and places like third level institutions and universities to be undermined by carrying massive new debt and being forced into major cutbacks. We must have a public sector bailout that is comprehensive and fair. “

UK News innomin - January 19, 2021
0
Chancellor Angela Merkel mentioned Tuesday that Germany is extending its pandemic limits, together with the closure of educational institutions and shops, right up...