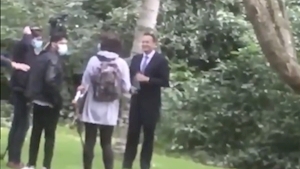 Gardaí have launched an investigation after a woman threw a smoothie at Leo Varadkar in Dublin.

Footage shared on social media on Friday afternoon appears to show a masked woman approaching the Tánaiste, who was preparing to give an interview on camera in Merrion Square.

The woman stands near the Tánaiste and the camera crew gathered in front of him. She then heads to Mr Varadkar and throws a smoothie in his face before running away.

Jesus, this is a poxy thing to do, regardless of your political view. pic.twitter.com/f3cRpJ3xPV

“When I saw her coming towards me I actually thought she was Avril Lavigne at first because she had the skateboard and everything, but she unfortunately wasn’t,” he said.

“She also had a smoothie which ended up all over my face and halfway down my suit, but look I had a spare suit and just got on with the day’s work.”

Former TD Noel Rock called it “a poxy thing to do, regardless of your political view”.

Writing on Twitter, former presidential candidate Gavin Duffy said the incident was “horribly uncouth” and an attack on democracy.

“It’s reported it was coffee but it could have been anything including acid. We need to better protect our politicians.”

Highest number of Covid patients in hospital since May

More than 3,000 fines and warnings issued over NI Covid regulations

Wales innomin - October 26, 2020
0
Just one week ago, Wales' First Minister announced that a fire-break lockdown was needed for Wales in order to prevent the...