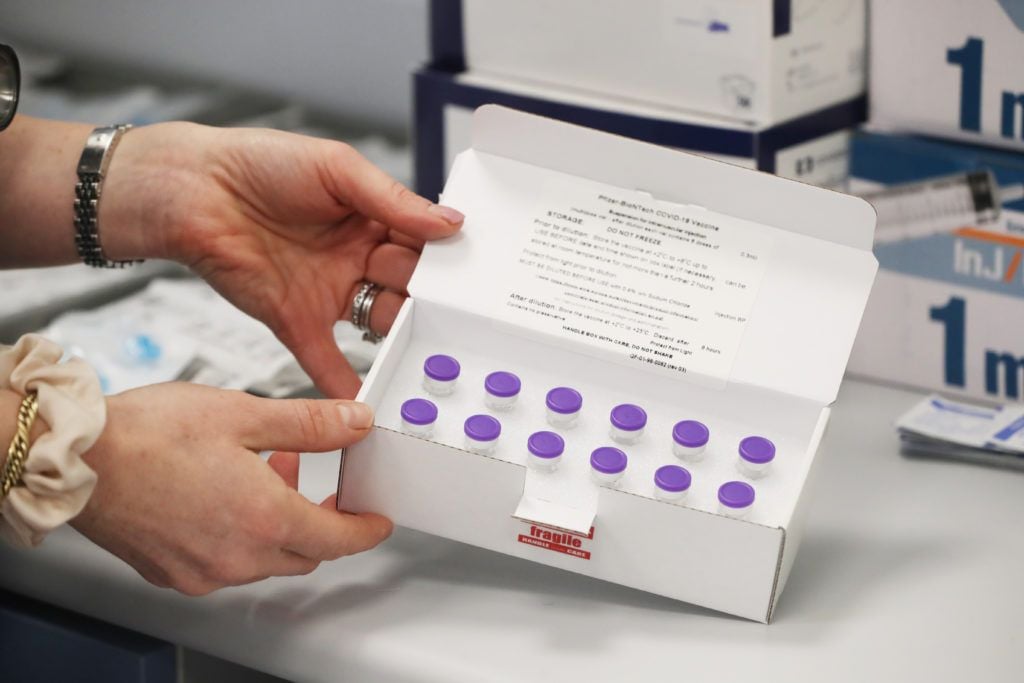 The vaccination of vulnerable groups aged under 60 is to resume using an alternative to the AstraZeneca shot, the Government has confirmed, with Leo Varadkar saying the vaccine rollout is still “broadly on track”.

Thousands of appointments were cancelled this week as the Health Service Executive (HSE) and Government assessed the impact of new advice from the National Immunisation Advisory Committee (Niac) on the vaccine.

It comes as the European Medicines Agency (EMA) said it expects to issue a recommendation on the single-shot Johnson & Johnson vaccine next week.

In a statement issued on Wednesday afternoon, the Government said that those aged 59 and younger in the very high risk and high-risk categories “will receive an alternative vaccine to the AstraZeneca vaccine. The roll out to these groups will continue now on this basis”.

Uncertainty remains, however, over the precise role to be played by the single-shot Johnson & Johnson vaccine, which had been due to arrive into Ireland on Wednesday.

However, the company delayed its deliveries to Europe after regulators in the United States announced they were investigating reports of clotting events potentially linked to the vaccine.

Earlier, the Tánaiste said the vaccination programme remains “broadly on track” after securing an additional 550,000 Pfizer jabs through the EU.

The European Commission confirmed on Wednesday that it had secured an additional 50 million doses of the BioNTech-Pfizer vaccine to be delivered in quarter two, between April and June.

Leo Varadkar said the Republic’s share of 550,000 doses will help to make up the shortfall caused by uncertainties over the vaccine from Johnson & Johnson.

What we lost yesterday in terms of Q2 vaccine supply from Janssen we regained today with an extra 550k Pfizer shots. Janssen may yet get the green light. Vaccine programme still broadly on track https://t.co/SRU0j82zR2

Mr Varadkar tweeted on Wednesday: “What we lost yesterday in terms of Q2 vaccine supply from Janssen we regained today with an extra 550k Pfizer shots.

“Janssen may yet get the green light. Vaccine programme still broadly on track.”

At a press conference on Wednesday, European Commission President Ursula von der Leyen said: “As we can see with the announcement by Johnson & Johnson yesterday, there are still many factors that can disrupt the planned delivery schedule of vaccines.

“It is therefore important to act swiftly, anticipate and adjust whenever possible.

“We are doing everything in our power to support Europe’s vaccination rollout, also by increasing the supply of vaccines in the coming weeks and months.

“This is why I am pleased to announce that we have reached an agreement with BioNTech-Pfizer to, once again, speed up the delivery of vaccines.

“Fifty million additional doses of BioNTech-Pfizer vaccines will be delivered in quarter two of this year, starting in April.

“Those 50 million doses were initially foreseen for delivery in the fourth quarter of 2021. Now, they are available in quarter two.”

The vaccine rollout was dealt two significant blows this week as the Government seeks to meet a commitment that every adult in the country who wishes to take a vaccine will have it by September.

On Monday, health authorities limited the use of the AstraZeneca jab to people aged over 60, prompted by concerns around rare blood clots.

On Tuesday, Johnson & Johnson delayed distribution of its vaccine to Europe after US regulators recommended a pause in administering the jab to give time to investigate reports of a rare blood-clotting side effect.

Minister for Health Stephen Donnelly said on Tuesday that the two setbacks had presented health authorities with a “logistical headache”.

Asked if restrictions on the J&J product would delay the vaccine programme, and consequently the reopening of society, Mr Donnelly replied: “There’s no question if we had to fully pull the Janssen or the Johnson & Johnson vaccine, there’s no question, you can’t vaccinate as many people with less vaccines.”

On Wednesday, Liz Canavan, the assistant secretary general at the Department of the Taoiseach, warned that Ireland’s low level of vaccination meant the country could face another wave of the virus.

She said: “While significant progress is being made in controlling the disease and in rolling out vaccines, we still have a high level of infections.

“We are dealing with a much more transmissible virus than last year. The absolute number of people fully protected through vaccination remains low.

“This means the risk of Covid is still with us and that Ireland could experience a further wave of infections if public health restrictions are eased too quickly or we don’t stick to the plan.

“The priority must remain in the coming weeks on controlling this disease.

“These few weeks are crucial. So far the careful approach is working. We are still on track which means brighter days and further easing of restrictions won’t be too far away. We will get there.”