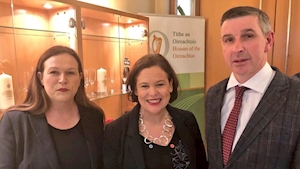 Former Senator Ian Marshall has expressed his disappointment that he learned that he was not being nominated to the Seanad for a second term via social media.

It was very significant that there was now no Unionist voice in the Seanad and the “entire Unionist community in Northern Ireland” felt let down, he told RTÉ radio’s Today with Sarah McInerney show.

Mr Marshall, a former president of the Ulster Farmers’ Union, said he had not received an explanation why he was not nominated. He had been expecting a call on Saturday and found out he had not been nominated when he read a tweet by a journalist.

“It was a bit of a shock that there was no call.”

He said he had been brought up to have manners and show courtesy and he felt it was “a huge insult” to hear that he had not been nominated through social media.

“I’m not sure who made the decision. The silence is interesting, no one is taking ownership.” The “optics” did not look good, he said. He had come under a lot of criticism when he took up the Seanad seat in 2018, he had been warned it was “tokenism”, but he had reassured the critics that the Seanad “was not a cold house for Unionists.”

It set a bad example that the one Unionist voice in the Seanad was gone. He had experienced a “tsunami of reaction”.

“I never chased this. I wanted to make a chance. I took the opportunity, I made a leap of faith.”

Mr Marshall owns a farm near Markethill in Co Armagh and was an opponent of Brexit.

The independent unionist was supported by Sinn Féin in his last candidacy for the post.

The leader of the part, Mary Lou McDonald, criticised the Taoiseach Micheál Martin for not nominating anyone from Northern Ireland in his Seanad nominees at the weekend.

Tánaiste rules out mandatory quarantine for people travelling to Ireland

Wales innomin - July 14, 2020
0
Police are investigating what they described as the "sudden and unexplained" death of a three-year-old boy in Cardiff. South Wales...

Wales innomin - July 14, 2020
0
The forecast for the weekend is not as good as originally thought, but high pressure is on its way to Wales....

What will happen on GCSE and A-level exam results days in Wales this year?

Wales innomin - July 14, 2020
0
Teenagers finishing their GCSEs and A-levels this year have already missed out on exams, their school proms and now next month’s...

What will happen on GCSE and A-level exam results days in...