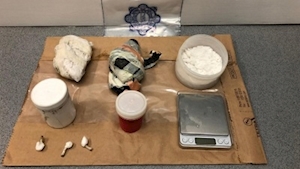 Two men have been arrested in Longford in connection with a cocaine seizure.

Drugs with an estimated street value of €72,000 were recovered during the search of an apartment in Granard yesterday.

The two men, who are in their 30s, were arrested at the scene.

The search was carried out as part of ongoing investigations into the sale and supply of controlled drugs in the Longford area.

Both men are expected to appear at a special sitting of Longford District Court this evening.