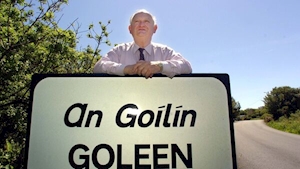 Tributes have been paid following the death of one of West Cork’s longest-serving public representatives, former Fine Gael TD Paddy Sheehan, just a week after the death of his wife, Frances.

Mr Sheehan (87) from Schull, who was involved in politics for over 50-years, was first elected to Cork County Council in 1967 before being elected a TD for Cork South West from 1981 to 2002.

Despite losing his seat to Fianna Fáil’s Denis O’Donovan in Fine Gael’s disastrous 2002 election, he stood for election again and, at the age of 74, he won the seat back before retiring from politics in 2011.

Taoiseach Michéal Martin has expressed his condolences to the Sheehan family, calling him an “outstanding public representative”.

“Paddy had a warm personality, wit and was blessed with a great sense of humour. He was a very decent and likeable man.

“His passing comes so soon after the death of his wife Frances. They were a great couple who went everywhere and did everything together. Both of them will be sadly missed,” said the Taoiseach.

Former Taoiseach, John Bruton also paid his respects to Mr Sheehan saying he was “a great advocate of the interests of rural Ireland”.

“His journey to Dail Eireann each week was longer than that of almost every other TD, but he made himself heard in the Dail Chamber frequently and strongly.

“He had a great sense of humour and was beloved across all political divisions.”

Mr Sheehan was his party’s deputy spokesperson on agriculture with special responsibility for forestry until 2010 when he had to resign the position after controversy.

Sad news today, the mighty & great Paddy Sheehan has passed away this morning. A true servant to the people. One of the finest public representatives West Cork ever had. A privilege to serve with him. RIP Paddy Sheehan pic.twitter.com/WHsBNFfTOD

He issued a full and unreserved apology in September 2010 for his behaviour towards a garda the previous July who had stopped him driving out of Leinster House grounds while he was under the influence of alcohol.

An internal garda report said he had threatened her career and said she would never be promoted if Fine Gael got into power.

When he retired from politics in 2011, he said that was “all water under the bridge” and that the issue has been “blown out of all proportion by journalists”.

The couple is survived by their four children, Diarmuid, Deirdre, Eucharia and Maebh, and their grandchildren.

The places in Wales where coronavirus infection rates are growing fastest

Wales innomin - September 28, 2020
0
With the coronavirus situation moving very fast in Wales people want to know where the virus is currently on the march....

Ireland innomin - September 28, 2020
0
Updated at 12:29The Government is expected to decide at the end of the week whether additional restrictions are required across four more counties...

The 10 most annoying phrases for a conference call, Zoom or hangout

Wales innomin - September 28, 2020
0
The sharp increase of daily conference calls has brought a whole new set of buzzwords and phrases into our work lives....

The places in Wales where coronavirus infection rates are growing fastest

Government expected to decide on restrictions for four more countires by...

The 10 most annoying phrases for a conference call, Zoom or...