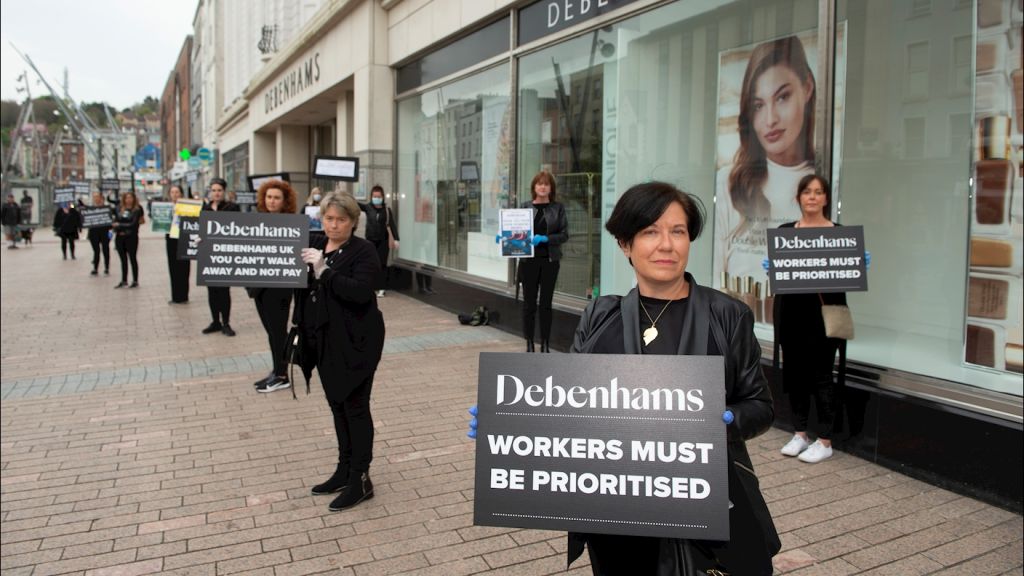 The Mandate trade union has called for “definitive action “ from Taoiseach Micheál Martin to resolve the protracted dispute involving the retailer Debenhams.

In a letter to Mr Martin to mark the 200 days in which former Debenhams’ workers have staged pickets at stores, the union said they deserved the support of the State in bringing the dispute to an end.

As the Irish Times reports, Mandate and the ex-Debenhams’ workers are seeking the implementation of a redundancy package of four weeks pay per year of service which had been agreed with the company a number of years ago. This would be significantly higher than the statutory terms available currently.

“Surely after two hundred days our striking Debenhams members deserve and need to see some definitive action by Government aimed at bringing their current plight to an end.

“Therefore, we are now calling on you to immediately proactively intervene and use the significant influence and power of your office to help build the circumstances that will facilitate a speedy resolution to the current dispute.”

Mr Light said Mandate members had “ picketed through some unimaginable weather, with many pickets operating 24/7 for more than half a year”.

“They are mostly women and many have decades of service working with the company. Some are grandparents. Some have been arrested, or intimidated by gardaí. And some have been physically threatened on the picket lines. This has gone on for far too long and it is time the Taoiseach proved that his words are more than empty rhetoric.”

He also said on numerous occasions the Taoiseach had gone on the record publicly, and indeed privately, with some of our members in dispute stating that he believed the ex-Debenhams’ workers were treated shabbily by their employer and that “a process should be found to explore a satisfactory resolution to the current dispute.”

Weather modify: what is the UK’s NDC and why is it critical? | Environment

UK News innomin - December 3, 2020
0
What is the UK’s NDC and why is it critical? Each nation signing up to the Paris arrangement established out a focus on, regarded...

Weather modify: what is the UK’s NDC and why is it...