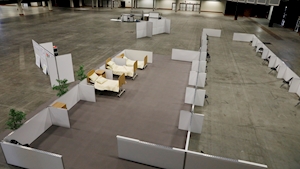 Irish people will have to “go the extra mile” to ensure that restrictions on movement are limited to two weeks.

Chief Medical Officer Dr Tony Holohan said today that he was hopeful that the government’s restrictions, announced on Friday, would work as the country prepares for a surge of cases between 10 and 14 April.

Dr Holohan said that attention will turn to the outbreak of the illness in the likes of nursing homes and care facilities.

He said that 20% of cases in the east have been found in nursing homes. However, he said that “there is more we all should be doing” to fight the spread of Covid-19.

“We want to focus on those environments where there are particularly vulnerable people, such as nursing homes.”

Dr Holohan said that it was impossible to say where Ireland is in terms of its response to the virus, but said that there were “encouraging signs”, with the number of average contacts a confirmed case had falling from 20 to just over five.

“We’ve seen an increase that started at 33% per day. It has continued to rise, but maybe not to that rate, maybe half that rate.

“That’s why we’ve put in place the measures we have around schools, around mass gatherings up to the restrictions we announced on Friday. The virus will not survive if we can stop it from being transmitted from one person to another.

Dr Holohan said that the advice for people who are over 70 or have one of a number of conditions that require “cocooning” was not to go for walks, not to allow non-essential visitors into their homes and to avoid as much contact with people as possible.

Wales innomin - March 6, 2021
0
Police have had much of their time taken up of late with ensuring the rules around the coronavirus pandemic are abided...

‘My boyfriend knocked me unconscious in front of my children who were screaming at...

Wales innomin - March 6, 2021
0
'He seemed brilliant, he was everything you would want, charming and caring'. Those were Rhiannon Morris's first impressions of her new...

Wales innomin - March 6, 2021
0
Around a year ago, country rock duo Hawthorn Avenue were driving through the early hours along the winding roads from north...

‘My boyfriend knocked me unconscious in front of my children who...

The musicians and an entire industry brought to its knees by...