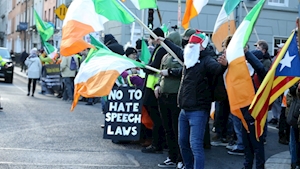 A man in his early 40s has been charged and will appear in court at a later date after rival protest groups came face to face outside the Dáil this afternoon.

Three people were arrested during the protest.

An 18-year-old man and a woman in her late 30s will be dealt with by adult caution.

At least 300 people gathered on Kildare Street earlier this afternoon for a rally and carol-singing in protest against racism and hate speech.

Trócaire delighted to support the #Rally4Peace at Dáil Éireann. Speaking up for love and unity, not hate and division. pic.twitter.com/iA6MZo6nFc

Addressing the group, MC Tony Groves said it was a positive protest.

“We are here to talk about care, love, hope and joy because hate grows in the dark, fear will fill a void,” said Mr Groves.

They were met by a rival group of up to 120, which flew the banners of Yellow Vests Ireland and the political party Renua.

Barrister Tracey O’Mahoney, who was part of that group, claimed the government’s review of hate crime legislation would destroy free speech.

“This new working definition is going to be based on a perception test so whether or not you are going to be charged with a hate crime will be determined based on the belief of the alleged victim,” said Ms O’Mahoney.

PBP were on the rally against racism and the far right today – we need to be united to win a more equal society #rally4peace #rallyforpeace #antiracism pic.twitter.com/olP0yACXPI

But RISE TD Paul Murphy said the question of free speech was just a ruse.

“This is, for the far right, just another fig leaf to mobilise on and really what they are about is to get as big as possible and to try and get a pool of people to recruit from,” said Deputy Murphy.

Ireland innomin - May 6, 2021
0
A Garda hotline set up for the public to report breaches of Covid-19 regulations in Donegal has already received a noted number of...