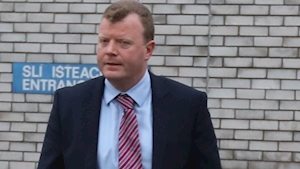 Quinn Industrial Holdings (QIH) executive John McCartin has said that resolve is still needed to find the ‘paymaster’ behind the campaign of intimidation against the company.

He also told RTÉ radio’s Today with Miriam O’Callaghan show that he agreed with comments by Fine Gael TD Michael D’Arcy about the resourcing of An Garda Siochána in the area.

“We did have sustained attacks against us, there were a number of incidents that were allowed go unchecked – the incitement to hatred at a public meeting, the posters defaming us and face to face threats.”

Mr McCartin acknowledged that he and his fellow directors had not taken the threats seriously initially.

He said that the QIH executives have confidence that the gardaí are doing everything they can in the investigation, which he said is wide ranging, deep and well resourced. He said he was especially grateful for the efforts made to ensure his own personal safety.

However, he warned that he and his fellow executives cannot be complacent that just because they are taking precautions that they are not invulnerable.

“There is still a lot of risk to every activity and there are indications that this campaign of intimidation is not over,” he said.

When asked about comments by the Minister for Justice Charlie Flanagan about a cross border task force, Mr McCartin said he understood the Minister’s position as he could not act unilaterally and his position was even more difficult with no Assembly in the north.

Crime doesn’t respect borders, he said, but politicians do have to.

The death of Cyril McGuinness was shocking news, he said, but there was concern that an “evidentiary lump” had now gone with his passing. He said the “treasure trove of evidence” found at the scene “can only be a good thing.”

Responding to a question about an email from Sean Quinn Jnr to a QIH executive in which he offered to meet “to restore harmony in the community,” he said the combined response from the executives had been that the community did not need to be calmed.

“The community is not waging war with us.”

Earlier today, the Garda Representative Association called on the Minister D’Arcy to apologise for his comments on RTÉ’s The Week in Politics.

“We’re asking for him to apologise for what he said about the members on the ground in that area,” said president of the association Jim Mulligan,

“They are dealing with a very violent situation up there. They are trying to police that area as best they can with the resources they have.”