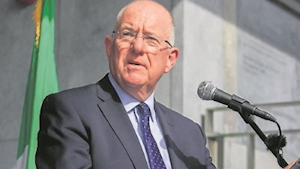 Up to 50 Syrians who arrived at Dublin Airport this morning have moved into the Mosney accommodation centre in Co. Meath.

The families have been resettled to Ireland under the Irish Refugee Protection Programme (IRPP), which has now brought 3,206 asylum seekers to Ireland.

The Minister for Foreign Affairs Charlie Flanagan welcomed the families today, and re-affirmed the Government’s commitment to take in 2,900 more asylum seekers by 2023.

The Minister said: “I am delighted to have had the opportunity to meet with the families today.

“Their long journey to find safety and sanctuary is now over and I know that the people of Ireland will welcome them with open arms and the offer of friendship and support.”

The families had been living in a UNHCR refugee camp in Lebanon and were interviewed earlier this year by officials from the Department of Justice and Equality as part of a selection mission for the resettlement strand of the IRPP.

The families had their refugee status assessed by UNHCR in Lebanon ensuring that they have refugee status on arrival and can immediately be offered integration measures, including English language and orientation classes, to help them begin their new lives in Ireland.

They will initially stay in the Mosney accommodation centre before being settled in communities across the country.

The first steps to a new life in Ireland. ..11 Syrian refugee families arrive at Mosney. There were 23 children in this group. The youngest just 5 months. @rtenews pic.twitter.com/EYoZWliorK

Minister Flanagan said: “The families that I have met and spoken with today are living proof of the transformative impact of refugee resettlement. They can now look to the future with hope for themselves and their children.

“With over 70 million forcibly displaced persons globally and almost 7 million from Syria alone, it is only right and proper that Ireland plays its part and offers a helping hand to those less fortunate than ourselves.”

Ireland innomin - December 4, 2020
0
A couple who sued claiming they were exposed to toxic chemicals after spray foam insulation was installed in their home have been awarded...