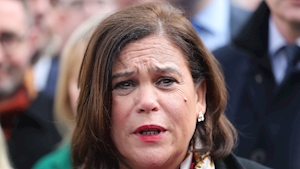 Sinn Féin leader Mary Lou McDonald has said it’s “disgraceful” that her party’s democratic mandate could be ignored by the “old boys’ club” of Fianna Fáil and Fine Gael in the aftermath of last Saturday’s general election.

Speaking at a visit to a community grouping in her Cabra constituency in north Dublin, Ms McDonald said that should either of the other two main parties end up in Government for a five-year stint it would cause “very considerable anger” among the electorate.

“I have no sense of entitlement, but I can tell you this much, the people who voted for us in their hundreds of thousands are entitled to respect,” she said.

“I think it is actually quite disgraceful that the the old boys’ club of Fianna Fáil and Fine Gael believe that they can set aside the democratic mandate of Sinn Féin.”

She acknowledged that she had received a voicemail from Micheal Martin saying he would be willing to meet, but not to discuss entering coalition with her party. She said she had responded, and would be phoning Mr Martin again later today.

“There is only one thing I want to discuss with him,” she said, referring to discussions about forming a Government, adding that it is “a little bit silly” that Mr Martin will not discuss Government formation with her.

She added that “nobody gets off the hook and their responsibilities simply because the mathematics are difficult – this is a matter of political will”.

“The truth is that a Government has to be formed. I want him to sit down with us, not because we have identical policies, we don’t. Just because Fianna Fáil and Fine Gael don’t like the result of the election doesn’t mean that they can deny people a Government,” she said.

Ms McDonald said that she has “no concerns” about fighting another election, should one be required.

“I don’t think that if we go back to the people that they will suddenly decide that actually they don’t want change. What needs to change here is the mindset and sense of entitlement that Fianna Fáil and Fine Gael hold that they alone are allowed to hold power. That day is over because the people have said so,” she said.

“I actually happen to think as a political leader that my job isn’t to sit on the sidelines.”

“This isn’t about Sinn Féin. This is about monitoring the mandate that has been given, and I haven’t heard anybody dispute the fact that the big theme of this election was change,” she said.

“They want to keep us out because there has been a stranglehold on power and on Government by two parties for generations.”

She said that should she get to speak to Mr Martin today she would tell him “what you’re doing is very, very wrong, it is wrong to disrespect the views and wishes of hundreds of thousands of Sinn Féin voters”.

“You have been told that people do not want Fine Gael back in with Fianna Fáil in any guise. People want a Government for change. All of us have a responsibility to deliver that.”

Asked, meanwhile, what she would say to the other parties of the left like the Green Party and the Social Democrats should they be thinking of going into power with the other main parties, Ms McDonald was unequivocal: “Don’t do it.”

She said it would be “wrong” given the election results for either Fianna Fáil or Fine Gael to be maintained in power.

“It’s dangerous and I think it will not serve our people well so I would say don’t do it.”

Clouds with some rain

Ireland innomin - April 5, 2020
0
A man has been arrested after threatening staff at a shop in Dublin and throwing a shopping basket at them.It happened on Dame...

The unsung heroes keeping Wales going during the coronavirus lockdown

Wales innomin - April 5, 2020
0
As millions of us stay at home to help fight the Covid-19 outbreak, millions more are having to carry on as...

UK News innomin - April 5, 2020
0
9.23am BST 09:23 Professor Neil Ferguson has explained there are “some signs” that the latest lockdown measures in pressure across the United kingdom has slowed...

The unsung heroes keeping Wales going during the coronavirus lockdown