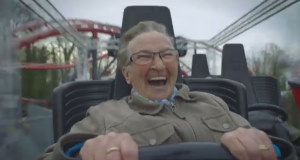 The screams by passengers on Tayto Park’s planned new €15.5 million rollercoaster won’t impact on nearby residents.

That is according to Tayto Park owner, Raymond Coyle who said today that the new rollercoaster comes with a series of specific measures aimed at eliminating any noise impacts for nearby residents.

Mr Coyle said: “There will be screams, but they will be drowned out.”

Four residents, Jeremy Butcher and Suzanne Galwey along Donal Greene and Clare Smith had brought the case before An Bord Pleanála after Meath County Council gave the plan the green light.

Mr Coyle said today that he was “shocked” by the An Bord Pleanála decision. He said: “I couldn’t believe it when I was told.”

Mr Coyle has now lodged plans for the new roller coaster project with Meath County Council which is made up of two rollercoasters.

Mr Coyle said that the new roller coaster “has the wow factor because we do need to keep the magic going. It is the first of its type in Europe”.

Planning documentation lodged with the plan state if the rollercoaster doesn’t proceed “the longer-term viability of the Park would be brought into question”.

The new plan contains 14 separate noise reduction measures drawn up by Dutch roller-coaster maker, Vekoma which has made roller-coasters across the world such as Space Mountain and Big Thunder Mountain for Disney.

Planning documentation lodged with the Council state that Vekoma “are confident that the proposed Coaster 2021 will not have a noise impact within the setting of Tayto Park”.

The noise reduction measures include three noise retention tunnels to mitigate patrons’ screams on the rollercoaster at height and high intensity track positions.

Tayto Park is to also construct a 106 metre long six metre high sound barrier along the northern boundary of the Tayto Park site.

The noise reduction measures also include a ‘silent chain drive’; a silent roll back system and polyurethane wheel covers to dampen vibrations and contact noise with the rail track.

Environmental consultants for the project, Malone O’Regan Environmental state that “there will be no increase in noise as a result of the proposed new rollercoaster”.

Mr Coyle said that everything possible has been done to meet the noise concerns of the local residents and An Bord Pleanála in the new Coaster plan.

Mr Coyle confirmed that he has visited the homes of the local residents opposed to the previous plan with the new plans in a bid to allay their fears over noise impacts from the rollercoaster.

Mr Coyle described the meetings as “very civil and good”.

Mr Coyle presented the residents with engineering reports showing that the new rollercoaster will have a negligible noise impact.

Mr Coyle said that the residents will make up their own minds in their own time about the plan.

Asked if the Coaster 2021 project will be up and running for 2021, Mr Coyle: “if there is an appeal to An Bord Pleanála, that is a long shot and probably unlikely.”

Planning documents lodged with the application state that if the plan is operational for 2021, visitor numbers will soar to 715,000.

The numbers to attend Tayto Park this year totalled 615,000. Mr Coyle said: “Numbers have been flat the last two or three years and we need to do something about it.”

Twenty five people will be employed during the construction phase and 40 if and when the new Coaster 2021 is operational.

A decision is due on the plan towards the end of January.