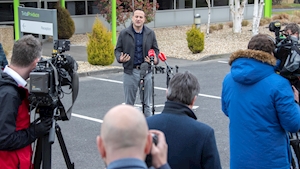 The Taoiseach has offered a stark warning that the next government will only suffer “disappointment and defeat”.

As his party eyes further talks with Fianna Fail next week to form a government, the two will need further support from a number of others to garner the 80 seats needed for a majority.

Leo Varadkar has told any party considering going into government that it won’t be easy, will take immense effort, under “constant criticism, disappointment and defeat”, trying to get the country back on track after the Coronavirus pandemic.

“They’re not going to be popular.

The Taoiseach has arrived at Total Produce in Swords to discuss supply chains in Irish supermarkets. (It’s obviously casual Friday rules and I’m feeling much better about wearing trainers because Varadkar is too) pic.twitter.com/s5DQ6Chu8s

During the week the Green Party ruled itself out of any further government formation talks, instead concentrating on their proposal of a “unity government”, with all parties represented in a national government style, to steer the country through the current pandemic.

This leaves only the Social Democrats and Labour Party as well as a independent TDs as both parties are against involving Sinn Fein, who garnered the largest vote in the last election.

Leo Varadkar has not ruled out the Green Party however, and says the door remains open.

“My party is willing to talk to the Labour Party, the Green Party, Social Democrats and independents about participation in government,” he said.

“I need to be very frank with people, the two parties together didn’t win enough seats in the election form of government.

“So we will need a third party, as well as some independents as well to come on board, and so far that hasn’t been possible.”

Taoiseach Leo Varadkar says his thoughts are with the families of the ten people who died in Ireland and that he wishes Boris Johnson well, and won’t be getting into criticism of other countries responses to the pandemic. pic.twitter.com/xtLw2qZ40D

There are conflicting legal opinions on whether or not the Seanad can approve any new legislation beyond midnight on Sunday, without the 11 Taoiseach’s nominees being appointed to the house, which would normally be carried out after the Seanad election on Monday.

The government is confident that they have all the legislation that they need passed by that time.

“As things stand any legislation we need we believe we’ll have through by the weekend,” Mr Varadkar added.

“But of course it is a possibility that at some stage over the next few weeks we may find we need additional legislation, and at the very least that legislation would be open to challenge”

Structure and organisation of Tusla is ‘not good,’ its CEO warns

What we know so far

UK News innomin - November 25, 2020
0
China has dismissed criticism of its procedure of Uighurs in a new book by Pope Francis in which he describes the “persecution” of...

EU plots to ban British sausages from Europe if a post-Brexit...