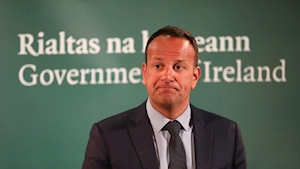 The Government has strongly defended Taoiseach Leo Varadkar’s use of the Government jet to travel to Croatia for a European People’s Party event.

In the past, Mr Varadkar and his predecessor Enda Kenny have travelled to EPP gatherings using commercial airlines, as the events are deemed to be party-political in nature.

While Mr Varadkar attended this week’s EPP congress in Zagreb as leader of Fine Gael, a Government spokesperson said the trip also included Government business and cited a bilateral meeting with the Croatian prime minister Andrej Plenkovic. Mr Plenkovic is also a member of the EPP.

Mr Varadkar also attended a community event in the Irish embassy during the trip.

However, Fianna Fáil MEP Billy Kelleher raised questions around the use of the Government jet, asking in a tweet:

“If this is so then having Government jet flying him to EPP events is wholly inappropriate and is an abuse of public funds and his position as Taoiseach.”

The Department of Defence confirmed there were technical issues with the Learjet which the Taoiseach had initially planned on taking, so the Casa was instead used to fly Mr Varadkar and a number of officials to Croatia.

“The Learjet was scheduled to conduct a MATS [Ministerial Air Transport Service] mission.

“During a pre-flight inspection (on November 19), a technical issue was discovered. The delegation was flown using another aircraft (Casa), which is regularly used for this purpose.”

A spokesperson for Fine Gael said the party had no comment to make on the matter.

Separately, Minister of State for European Affairs Helen McEntee was voted in as an EPP vice-president at the congress.

Ms McEntee will be part of the group’s leadership team that will include newly elected EPP president Donald Tusk and president of the European Commission Ursula von der Leyen.

Speaking after the event, Mr Varadkar said: “It has been a very good EPP congress, we have successfully secured the election of Helen McEntee as an EPP vice-president winning the third seat out of 10, so a very good day in that regard.”

He said he held meetings with seven heads of state and had also spoken to Ms von der Leyen and EU Brexit negotiator Michel Barnier.

Wales innomin - September 19, 2020
0
Police have been called to a military base in Pembrokeshire as protests are being staged against plans to use it as a...

UK News innomin - September 19, 2020
0
From a seemingly unattainable place, Nahaarr has swooped to acquire the Ayr Gold Cup under an influenced Tom Marquand, who is getting every...

Live updates as police called to protests at military base in...