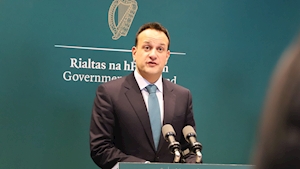 By Noel Baker and Joel Slattery

In a rare and historic address this evening, Taoiseach Leo Varadkar has said of the current phase of the Covid-19 pandemic: “This is the calm before the storm, before the surge and when it comes – and it will come – never will so many ask so much from so few.

“We will do all we can to support them.”

Outlining new initiatives likely to soon come on stream, including the ‘cocooning’ or elderly people and those vulnerable through illness, the Taoiseach also warned that the crisis could extend into the summer.

Addressing the nation under Section 112 of the Broadcasting Act, only used in times of national emergency, Mr Varadkar began by walking to the podium and saying: “this is a St Patrick’s Day like no other, a day none of us will ever forget.”

He repeated recent comments projecting 15,000 cases by the end of this month and many more after that and said: “We are in the middle of a global and national emergency, a pandemic, the likes of which we have never seen before.”

We can stop it in its tracks’

“We can’t stop the virus, but we can stop it in its tracks,” he said adding for the need to avoid “close human contact”.

“These choices aren’t easy, but they are necessary,” he added.

“We will learn from the experience of other countries,” he said, “what works and what doesn’t.”

The Taoiseach said the pandemic could go on into the summer, adding that co-operation from the entire public was needed to ensure grocery shops remain open.

The Taoiseach said older and at-risk people will have to engage in “cocooning” for a number of weeks.

Mr Varadkar also praised the nurses and doctors on the frontline of caring for those who get the virus.

“Not all superheroes wear capes – some wear scrubs and gowns,” he said, adding that his partner and sisters work in the health service and that there is “stress and anxiety” in families around the country.

He said the damage to the economy will be “significant” – but he insisted the country will prevail.

Mr Varadkar also stressed the need for people to look after their mental and physical health during this time.

Earlier on Tuesday evening, it was announced that there were 69 new confirmed cases of Covid-19 – bringing the total number in the Republic to 292. There are 62 confirmed cases in the North.

Doctors demand to know when staff will get proper equipment

UK News innomin - April 4, 2020
0
When Lil Nas X was increasing up in the small, conservative community of Lithia Springs outdoors Atlanta, Georgia, he was confident of two...

Ireland innomin - April 4, 2020
0
There have been claims that student nurses who are on placement are not being paid for their work.Last week Health Minister Simon Harris...