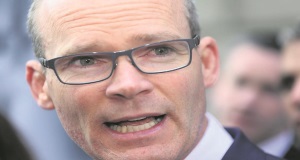 The Tánaiste says he is satisfied that the €140m flood defence plan for Cork “is the best engineering solution” and is not a “walls scheme” Simon Coveney made his comments as a tidal flooding alert was issued for the city centre over the next two days.

Officials warned of a “significant risk” of tidal flooding before and after the high tides at 4.50am and 5.13pm on Tuesday and at 5.34am on Wednesday.

Property and business owners have been advised to take steps to protect their property and the council said a limited supply of gel and sandbags are available at its depots on Anglesea Terrace and at Tramore Valley Park until 6pm tomorrow.

The flood alert comes as the debate continues over the design of the €140m Lower Lee Flood Relief Scheme (LLFRS) – branded by Save Cork City (SCC) as a “walls scheme”.

The OPW insists it’s a suite of blended measures, with its revised designs proving that it has taken on board public concerns. Mr Coveney said the OPW has put a lot of work into trying to respond to those concerns.

“They didn’t take into account the aesthetics of the city and the importance of the city’s heritage,” he said.

But he said the revised designs which have been released by the LLFRS team in recent weeks are “very, very different – they look great”.

“This is not a walls project, as it is described by many,” he said. “This is about protecting the city, its citizens, its businesses, and doing the minimum required to actually put flood defences in place.

“Some of the flood defences are demountable, taking account of the concerns that some people had understandably expressed in relation to some of the quaysides that they want to leave as is.

“But other elements of this plan, I think, will add significantly to the aesthetic value of the city, to recreational activity in the city, to the riverside, in terms of walks and leisure areas.

“It’s not just high tides that are getting higher. It is also significant rainfall contributing to a challenging problem coming the other way. So I am satisfied that this is the best engineering solution.”

He also said the much more expensive option of a tidal barrier is just not realistic now.

“Maybe at some point in the future it will be, but for now we have got to focus on what we have, which is a much, much better plan than we started out with,” he said.

Wales innomin - August 8, 2020
0
The mother of a five-year-old boy who was photographed by a paedophile while he was being abused has described the traumatic...