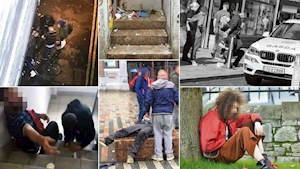 Business leaders in Cork City have called for a “more boots on the ground” approach to policing following a surge in complaints about open drug-dealing and addicts shooting up in public.

It comes as a counsellor at one of the few treatment centres that provides detox beds for heroin addicts warned that Cork is facing the “perfect storm” with the arrival of crack cocaine.

Michael Guerin of Cuan Mhuire said they have reports of crack dealers offering heroin for sale to cope with the cocaine comedown.

“Heroin used to be an end-stage drug,” he said. “Now, we see it in the mix, on a par with all the others. Calls to us about heroin treatment have increased by about 50% in the last three years.”

Mr Guerin backed calls from the Cork Business Association (CBA) for a major increase in Garda numbers, but said that is just one part of addressing the issue.

“We have six beds for drug detox,” he said. “Three years ago, we would have had between 50 to 75 people waiting for a place. Today, we have 250 people trying to access them. We need more treatment beds. The supports are just not there in the community.”

“We would encourage every business to highlight this request for additional resources, whenever possible, or by contacting your local politicians,” he said.

His message follows a surge in complaints from city traders about open drug-taking, with people shooting up on side streets, parks, and in the stairwells of car parks, day and night.

There has also been a visible rise in antisocial behaviour, such as street drinking, aggressive begging, and public intoxication.

“We acknowledge the problem is a societal issue and will require a multi-agency approach to resolve this,” said Mr Owens.

“But it is also an enforcement issue. Our principal concern is the lack of gardaí on the streets. We are requesting a return to good old-fashioned policing of ‘boots on the ground’, which has always been the most effective way to police.”

The Cork City Garda Division was due to get 10 new gardaí this summer, but they were diverted to deal with gangland violence in Dublin and Drogheda.

One St Patrick’s St trader, who asked not to be named, said: “The beggars have been edged out by the junkies. It’s beginning to feel as if some of the city’s shopping centres have more security guards on duty than there are gardaí patrolling the city centre.”

Fine Gael councillor Des Cahill said over the weekend that he could walk down Oliver Plunkett St any hour of the day and find someone dealing or doing drugs.

Earlier this year, figures showed the number of heroin users seeking treatment in Cork and Kerry has soared from 100 in 2008 to around 500, with 400 in Cork city and county. Most are over the age of 25.

A senior garda spokesman said resources are always on the agenda, with demands for gardaí across the city kept under constant review to maintain a visible presence in all areas.

“We are constantly addressing issues in the city centre on a daily and nightly basis, with huge plain clothes and uniform resources deployed, including members of a shoplifting unit, anti-social behaviour unit, and regular uniform units,” he said last night.

The division is due to get eight probationer gardai from Templemore in early December, he added.

However, he said policing is just one part of what should be a multi-faceted response to complex problem of drug use and addiction.

Heatwave predicted with parts of UK warmer than Caribbean – but not everywhere will...

Wales innomin - August 5, 2020
0
An official heatwave could be declared in the UK from Thursday with temperatures expected to be hotter than the Caribbean by...

Aberdeen ordered back into lockdown after cluster of cases

Wales innomin - August 5, 2020
0
Pubs and restaurants have been ordered to close and restrictions have been put in place after a 'signficant outbreak' in the...

Ireland innomin - August 5, 2020
0
An Irish woman living in Beirut has told of her experience of the explosion in the Lebanese capital yesterday which killed at least...

Heatwave predicted with parts of UK warmer than Caribbean – but...

Aberdeen ordered back into lockdown after cluster of cases