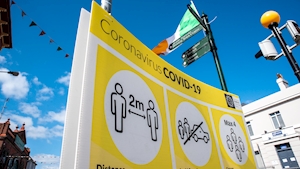 The Government has announced it is accelerating Ireland’s progress through the roadmap for reopening society in a bid to kick-start the economy and “save summer”.

Taoiseach Leo Varadkar confirmed that from Monday, the country will be in “phase two plus” and he said there will now be four phases of the plan instead of the initial five, with Ireland’s economy set to be almost fully open by July 20.

However, certain things, such as weddings, will not return until the autumn, Mr Varadkar warned.

The announcement came as a further seven deaths from Covid-19 were announced, along with 28 new cases.

The new plan allows for all shops to be able to open from Monday, the Taoiseach said, provided they stagger opening hours to reduce the burden on public transport; maintain distancing; and dedicate opening hours to older and medically vulnerable people. Shopping centres, meanwhile, can open from June 15. Mr Varadkar said this is to ensure that high street shops do not have an unfair advantage over shopping centres.

The tourism industry can reopen from June 29, including bars that serve food with table service only. Full guidance on how this can be done will be released, but Mr Varadkar confirmed that these pubs will not need restaurant licences.

However, hairdressers, barbers, and nail bars will remain closed until July 20 and Mr Varadkar offered no clarity about the date of the resumption of non-essential air travel. “I would encourage people not to go booking flights just yet; that would be premature,” he said.

Under the new guidelines, people will be allowed to travel 20km from home as well as anywhere within their own county, whichever is greater. Domestic travel restrictions will be lifted from June 29, and Mr Varadkar said this will allow people to “explore our country as if for the first time and rediscover the beauty that is all around us”.

This date will also see hotels, B&Bs, and holiday parks allowed to open.

“Summer is not lost and this can be a summer of hope if we keep the virus at bay,” Mr Varadkar said.

Under the acceleration, groups of six people can meet indoors or outdoors and up to 15 people can train together where distancing can be enforced. Outdoor facilities for children, including camps of up to 15, can open from Monday, while supervised playgrounds can also open. Up to 25 people can now attend funerals.

Earlier, the finance and social protection ministers confirmed that the €350 pandemic unemployment payment will become two-tiered from June 29, with people earning less than €200 per week before Covid-19 set to drop to €203 per week.

The new system will be “tailored, more equitable, and fairer”, Regina Doherty said

The temporary wage subsidy scheme will also continue until August.

Mask on public transport to be made mandatory

Wales innomin - July 11, 2020
0
A mum-of-two was "revolted" when her daughter found what appeared to be a lizard head in her vegan bolognese sauce. Polly...

Ireland innomin - July 11, 2020
0
A 16-year-old girl has been reported missing in Co Dublin.Chloe Fitzgerald was last seen in the Tallaght area on Wednesday, July 8.Chloe is...

Wales innomin - July 11, 2020
0
Supermarkets are urging anyone who bought one of a number of products to return them after potentially dangerous faults were found....