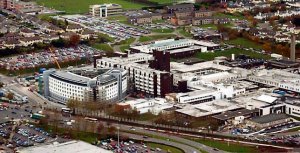 The recruitment problem means it could take up to a year before the thrombectomy service becomes available around-the-clock at CUH, which has the busiest inpatient stroke service in the country, treating more than 550 confirmed stroke patients each year, and another 500 potential stroke cases.

Currently the hospital’s thrombectomy service can be accessed Monday to Friday only, from 8am to 8pm, outside of which suitable patients – those who have suffered acute ischemic stroke – may be transferred to Beaumont Hospital for treatment.

It was due to expand to a 24/7 service last July, but failure to recruit a third consultant interventional neuro-radiologist put the plan on hold. Dr Liam Healy, clinical lead for stroke services at CUH, said a candidate had been interviewed and offered the post, but declined.

“We need a third interventional neuro-radiologist to go 24/7, so we are back to the drawing board. Realistically it could be another six to 12 months,” he said.

Thrombectomy is where the clot that caused the stroke is removed by mechanical means. The outcomes for patients can be dramatic, to the point of cure. CUH and Beaumont Hospital in Dublin are the only two stroke units in the country that provide thrombectomy. Beaumont is currently advertising for its fifth interventional neuro-radiologist. CUH takes referrals from all over Munster.

Some of the smaller units offer thrombolysis, where a drug is administered to dissolve the clot, but Dr Healy said this is “less powerful and less effective” than thrombectomy.

Dr Healy said CUH is hoping to apply for international accreditation for their unit from the European Stroke Organisation but they need a number of improvements first, including a 24/7 thrombectomy service, increased staffing levels and a therapy suite.

“It would be great for the people of Munster to have an externally accredited stroke centre,” he said.

The hospital has made a business case to management of the South-South West hospital group for a therapy suite/gym area on the stroke ward, which has been approved, but awaits funding.

CUH has an early supported discharge team which Dr Healy describes as “a great service” but at the moment, about 10% of patients are discharged with this support, while the target is 25%. Team includes a physiotherapist, an occupational therapist and a part-time speech-and-language therapist.

Dr Healy said a number of recent reports had shown a higher mortality rate at CUH for ischemic stroke patients when compared to similar hospitals, which gave “pause for thought”. However it was important to recognise that CUH dealt with complex cases.

“We attract the most severe stroke patients and that carries an increased mortality burden,” he said.

There are three main types of stroke:

It’s estimated that 87% of strokes are ischemic – when blood flow to the brain is blocked by a blood clot.

‘I’d like to maintain his hand’: English treatment residences weigh up danger of reopening...

UK News innomin - March 8, 2021
0
With a rub, a squeeze and a tickle, actual physical human get hold of restarted in quite a few treatment residences in England...

Ireland innomin - March 8, 2021
0
A man aged in his 30s has died after his car collided with a lorry in Co Roscommon. Gardaí are currently at the scene...

Wales innomin - March 8, 2021
0
Opt-in for testsThe majority of secondary schools and colleges in England have seen nearly all their students opt-in for on-site coronavirus tests, a...

‘I’d like to maintain his hand’: English treatment residences weigh up...