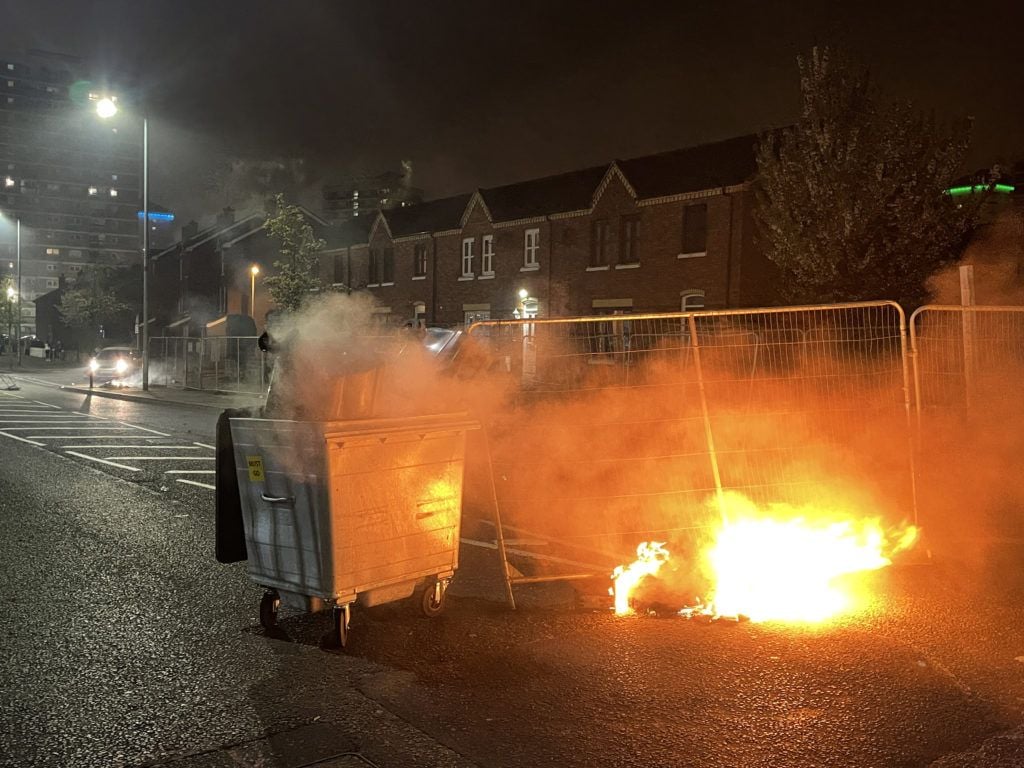 Ministers in the Stormont Executive have condemned the violence and rioting that has erupted in the North, prompting united calls for calm to be restored.

The Northern Ireland Executive issued a joint statement following a meeting of the powersharing administration to discuss the escalating public disorder.

Ministers were given an update by PSNI chief constable Simon Byrne.

In a statement, the Executive said: “We are gravely concerned by the scenes we have all witnessed on our streets over the last week, including those at the Lanark Way interface last night.

“Attacks on police officers, public services and communities are deplorable and they must stop.

“Destruction, violence and the threat of violence are completely unacceptable and unjustifiable, no matter what concerns may exist in communities.

“Those who would seek to use and abuse our children and young people to carry out these attacks have no place in our society.

“While our political positions are very different on many issues, we are all united in our support for law and order and we collectively state our support for policing and for the police officers who have been putting themselves in harm’s way to protect others.

“We, and our departments, will continue to work together to maximise the support we can give to communities and the PSNI to prevent further violence and unrest.”

The Stormont Assembly has been recalled from Easter recess for an emergency sitting on Thursday to debate the violence, which has mostly flared in loyalist areas.

The Assembly was recalled following a motion put forward by Alliance leader Naomi Long calling for MLAs to unequivocally condemn those involved and support the rule of law.

The First Minister said the injuries to police officers, harm to the North’s image and people’s property has taken the region backwards.

Speaking remotely, Ms Foster said: “Today is not the time to rehearse the arguments in the last few weeks. We should all know that when politics are perceived to fail, those who fill the vacuum cause despair.

She said that the future requires political leadership.

Justice Minister Ms Long said her thoughts are with the police officers who suffered what she said “could be life-changing injuries”.

“It is a mercy that no one has lost their life as a result of this appalling violence and I would appeal again for everyone with influence in our community to use it to end this,” she added.

Solidarity to the @translink drivers. They should be able to go to work and provide a public service free from fear and intimidation. The attack last night was reckless and dangerous and needs to be called out for exactly that. pic.twitter.com/tIk3m21YEO

“The scenes over the last week have been as depressing as they are disgraceful.”

“It is a miracle that, as we stand here today, no-one has been killed,” Ms O’Neill told MLAs.

She said illegal loyalist paramilitaries and criminal elements are influencing young people and orchestrating the violence.

“They stand back and send youngsters out to do their bidding,” she said.

“These people are no role models for our youth; they are outdated, they are antiquated and they are caught in a time warp which has no bearing on where the vast majority of people across this society now are or where they want to be.

“Organised criminal gangs bringing out children, young people and others to commit acts of destruction helps no-one and no cause,” he told the Assembly.

“The imagery this portrays of 21st century Northern Ireland into our second century is not something that anyone should want to see. This violence must stop before anyone is killed.

In the latest scenes on Wednesday night at the Lanark Way peace wall gates in west Belfast, several hundred people gathered on each side from 5pm which escalated to “significant disorder”.

Mr Roberts said multiple petrol bombs and missiles, including fireworks and heavy masonry, were thrown and it is “clear there was a degree of organisation” of the violence.

“We saw young people participating in serious disorder and committing serious criminal offences, and they were supported and encouraged, and the actions were orchestrated by adults at certain times,” he said.

“It’s early to indicate whether or not any proscribed organisations were involved but it is our assessment that is a likely situation.

“We have seen scenes last night of a new generation of young people who have been exposed to scenes that I’m sure we all thought were in generations gone by, and I would encourage anybody in a position of leadership – political representatives, community representatives, parents – take an interest in what young people are doing and to have a united message to prevent further scenes like we witnessed last night.”

Mr Roberts said two adults have been arrested following the incidents in Belfast and further arrests will be made in the coming days and weeks.

The violence is unfolding at a time of increasing rancour in the political sphere amid tensions over Brexit’s Irish Sea trade border and the fallout from the police’s handling of a republican funeral that took place during pandemic restrictions last year.

As rioting has flared across the North, all four main unionist parties continue to call for PSNI chief constable Simon Byrne to quit over how his service dealt with the funeral of former IRA leader Bobby Storey last year.

Unionists are furious at a decision by prosecutors not to take action against 24 Sinn Féin politicians, including Ms O’Neill, for attending the funeral – a decision partly related to the fact police engaged with the organisers before an event that drew 2,000 people on to the streets.

Mr Byrne has vowed not to resign and has signalled a desire to engage with people who have concerns about policing in the region.

Wednesday night saw a bus hijacked and set on fire, a press photographer assaulted and clashes between loyalists and nationalists at a peace line street that links the Shankill Road with the Springfield Road in west Belfast.