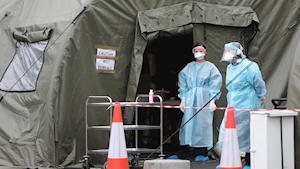 A member of the National Public Health Emergency Team (NPHET) says there are still ‘considerable concerns’ about the spread of Covid-19 in the midlands.

A NPHET meeting is underway to consider whether the lockdown in Laois, Offaly and Kildare should be lifted.

The restrictions are due to end on Sunday, after being in place for the past two weeks.

“There are considerable concerns about community transmission all over the country but particularity in some of those counties (Kildare,Laois and Offaly). So it will need to be looked at in detail later this morning before a decision is made.

“Then of course that advice is sent to the Cabinet and they make the ultimate decision of what restrictions are imposed or relaxed.”

This comes as yesterday a further two deaths and an additional 54 cases of Covid-19 were confirmed in the Republic.

Nineteen of the new cases were recorded in Dublin, eight in Kildare, five in Tipperary and the rest of the cases were in Carlow, Clare, Donegal, Kerry, Kilkenny, Laois, Limerick, Longford, Louth, Meath, Offaly, Waterford and Wexford.

Over the past month there have been a number of clusters in the Midlands, primarily stemming from meat factories. The likes of Carroll’s Cuisine in Tullamore, Co Offaly had seven confirmed cases of Covid-19 recently.

Elsewhere the Irish Dog Foods plant in Naas, Co Kildare, shut down after more than 30 Covid-19 cases were found while O’Brien’s Fine Foods, which runs the Brady’s Ham plant in Timahoe, Co Kildare, also confirmed that their factory would remain closed recently.