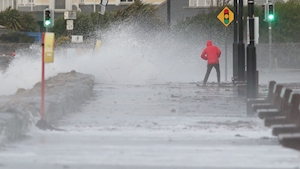 Met Éireann has issued a status yellow warning across the whole country as strong winds hit many counties and forced the closure of some roads and businesses.

Southerly winds reached mean speeds of 50 to 65km/h with gusts of 90 to 110km/h, especially in coastal areas and on exposed hills and mountains.

Weather chiefs also warned of widespread heavy showers or longer spells of rain with sunny spells at times, too.

Met Éireann said highest temperatures will reach between 12 and 16 degrees.

Continuing very windy countrywide for the rest of today with strong, very blustery southwest winds giving some damaging gusts. Widespread heavy showers or longer spells of rain also with sunny spells at times too. Cool with highest temperatures of 12 to 16 degrees. pic.twitter.com/i8VE9GNlNR

In a statement it said: “(Friday night) will be windy and showery with fresh to strong, gusty southwest winds and gales near northwest coasts. There’ll be further heavy showers of rain or hail, some of them thundery.

“Saturday will be a blustery or windy day. It will be mostly cloudy over the northern half of the country with spells of showery rain.

“Brighter further south with sunshine and showers. Highest temperatures of 12 to 16 degrees with fresh, gusty westerly winds, which will be strong to gale force in the northwest.”

There is also a weather advisory in place for the entire country until 6pm on Saturday with “unseasonably windy weather is expected”.

Met Éireann said: “Given the time of year, there is potential for wind-related impacts such as debris from trees and movement of unsecured outdoor items.”

A number of businesses, including recently reopened Krispy Kreme in Dublin, said they were temporarily closing their doors.

Krispy Kreme Ireland said in a tweet: “Due to the high winds, we have closed our drive-thru but hope to open again later. We will be reviewing every couple hours and keep you all informed.

Meanwhile, a number of roads were closed due to fallen trees, debris on roads and broken traffic lights.