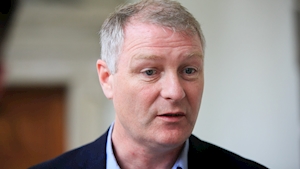 An apparent arson attract at the home of a Sinn Féin TD has been condemned.

Sligo-Leitrim TD Martin Kenny’s car was burned out at his home in Aughavas, near Ballinamore in Co. Leitrim in the early hours of the morning.

Mr Kenny had also received a death threat in recent days after speaking out against a “far-right ideology that is being peddled in this country” about asylum seekers.

The TD first spoke up after locals in Ballinamore, Co Leitrim, this week mounted protests outside an apartment complex earmarked to accommodate 130 asylum seekers.

Sinn Féin Leader Mary Lou McDonald has condemned what she said appears to have been a “very deliberate and targeted attack” at Mr Kenny’s home around 2.30am this morning.

“An attack on the home or property of an elected public representative is a deeply serious and sinister development. It represents an attack on the democratic system itself,” said Ms McDonald.

It is understood that the gardaí are now investigating the incident.

Separately, Mr Kenny made a complaint to gardaí last week after receiving a death threat via text which claimed he was a “traitor” and indicated he should be “executed”.