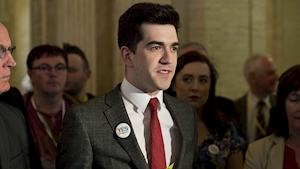 A Sinn Féin senator has reported a spate of online trolling to the gardaí.

Fintan Warfield says that a torrent of homophobic and transphobic abuse he suffered on Twitter led to an in-person attack outside Leinster House last week.

The 28 year old senator, who is a member of the LGBTQ+ community, has called on social media networks to take action against online harassment before they are forced to by law.

It comes as Children’s Minister Roderic O’Gorman recently said he was the victim of a “far-right social media pile-on” by groups using misinformation to play on concerns about child protection issues.

The Green Party politican described a homophobic element to the online abuse he received.

Many of Mr Warfield’s political colleagues have expressed solidarity with the senator.

Deep in the psyche of people there is a sickness. A sickness that eats into humanity, soul & ability to love and let live. They take their self-loathing & hate and aim at others. Its easier to target hate at others than do the work on yourself.

Our full and complete solidarity is sent to our comrade @fintanwarfield who has been subjected to vile homophobic abuse.

You are a formiddable advocate for our rights and a role model for every LGBT+ activist across Ireland. pic.twitter.com/gKhBBXpoTv

Wales innomin - August 5, 2020
0
The Duchess of Sussex has won a High Court bid to keep secret the identities of five friends who gave an...