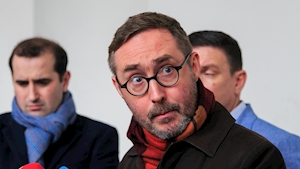 Sinn Féin has published a new bill today that aims to ban co-living housing developments across the State.

“The current co-living regulations allow for living spaces of 12 square metres, that is the average size of a car parking space, and the current price range for what we’ve been told is going to come on the market later this year is €1,300,” he said.

“The idea that anybody thinks it’s a good idea to rent out living spaces, and that would have a bed, a kitchenette and a toilet in the equivalent space of a car park for €1,300 a month just, I think isn’t living in the real world.”

SF’s @EOBroin has launched a new bill to ban co-living, which he says the Minister can do with the “stroke of a pen”. Says he knows of 10 applications so far for co-living developments which sees rooms the size of disabled parking spaces rented for €1300. #iestaff pic.twitter.com/PvaRq1GvdU

He said the proposed legislation would also remove lower design standards for build to rent apartments.

“Government policy rightly wants people to move into apartment living, that’s necessary both in terms of density and land use and meeting our climate change obligations,” he said.

“But the idea that renters should have lower standards than owner occupier apartment dwellers simply makes no sense.

The Opposition’s bill also proposed to remove the ability of a single minister to change planning law without a vote and the involvement of local authorities and the Oireachtas.

The bill would amend the current Planning and Development Act 2000 by deleting the section referring to co-living and repeal the Build to Rent and Sharing Accommodation planning rules.

Wales innomin - September 28, 2020
0
One of the most discreet but deadly household bugs is crawling around your sheets without you knowing. And with humidity levels...

UK News innomin - September 28, 2020
0
China’s strategies to relocate its British isles embassy to the East Conclude of London is dealing with opposition owing to its repression of...

How to get rid of dust mites in your bed this...