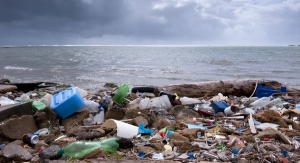 Shocking underwater footage of the Atlantic off the Kerry coast has revealed it has turned into a lifeless underwater desert over the past 30 years.

The new RTÉ documentary, Hot Air – Ireland’s Climate Crisis, reveals how the starkest changes in recent decades from increased carbon dioxide have been taking place silently below the surface of the ocean.

Footage taken 30 years ago off the tip of the Iveragh peninsula shows it bursting with fish life but ghostly film footage taken this year shows it is now a virtual wasteland.

The effects of climate change, pollution and overfishing are no longer thousands of miles away. They are here.

The documentary, screened on RTE One tonight, reveals the oceans are swallowing much of the increased atmospheric carbon dioxide resulting in them getting warmer and changing in chemical composition.

The only abundance of life which is filmed in the hour-long documentary is insect-like isopods feasting on littered plastic on seabed.

Underwater diver and wildlife guide, Vinnie Hyland, who made the films off the coast of Derrynane, said he has witnessed a tremendous change mostly in the context of biodiversity loss.

He said: “In the Seventies the place would have been teeming with fish life, now it just looks like a desert to me.

“But as the drop-off occurred then I noticed much more things like plastic.”

Vinnie Hyland said the absence of marine life is not the only change he has noticed while diving in the Kerry waters as the temperature has been rising over the decades.

He said: “I’ve been able to dive later into the year without feeling too cold.

“Now the water temperature seems to be staying reasonably warm right up until Christmas.”

He explains how pieces of plastic that resemble jellyfish can be eaten by endangered species like loggerhead turtles in the documentary.

“The depressing part is what we are doing to the marine life and because it is underwater, it is invisible,” he said.

Trains late leaving the depot and engineering works blamed for another morning of delays...

Wales innomin - January 28, 2020
0
Trains leaving the depot late and engineering works have been blamed for train delays and more congestion on carriages this morning....

Trains late leaving the depot and engineering works blamed for another...