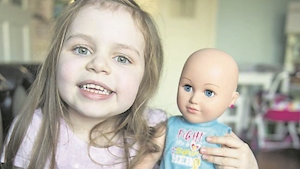 A mother who donated a kidney to her four-year-old daughter who had lost her own kidneys to cancer is appealing to everyone to consider being an organ donor.

Ella Hewitt, 5, was just four months old when she was diagnosed with a very rare form of kidney cancer called Wilm’s tumour.

Her mum Samantha, 34, who, along with partner Andy Hewitt, 35, also has son Jacob, 7, said she knew something was not quite right when Ella was just weeks old.

“She had a bit of reflux and she kept getting the hiccups,” said Samantha. “She also was breath holding, so I took her to the GP.”

The GP was not overly concerned but when Ella got the hiccups again and Samantha rubbed her belly to ease them, she said she “ could feel a golf ball-size lump under her rib cage”.

“I could see it on the ultrasound and that it was a tumour on her kidney,” said Samantha after the scan at Our Lady of Lourdes Hospital in their home town of Drogheda, Co Louth.

They were transferred to CHI Crumlin where doctors diagnosed Nephroblastoma or Wilm’s tumour.

“She had it in both her kidneys, which is very rare, because only 5% of children have it in both,” said Samantha. “Ella’s tumour was big, 14 cm by 13cm by 11cm, and in the other kidney they could see what that they thought were a precursor to tumours.”

Within five days, the four-month-old started chemotherapy. After eight weeks, doctors could see chemotherapy was not doing anything to her tumour.

“When she was six months old they took out that kidney,” said Samantha. “The tumour weighed 1kg kilo so it was 12% of her body weight.”

One rare aspect of Ella’s condition was that the tumours were inside, not outside, the remaining kidney.

Samantha said further chemotherapy kept the tumours at bay until January 2018 when one showed “significant growth”.

Later that month, Ella had her second kidney removed and began dialysis. When she was two years out of chemotherapy, they started the process of her preparing to go on the list for a kidney transplant.

Samantha was checked to see if she was a match.

“I just knew I would be,” she said. “I had this feeling the day I had the bloods checked, I feel like me and her are interlinked.”

On July 1 last year, four years to the day that she was diagnosed with cancer, Ella received one of her mother’s kidney. It began working straight away.

“I think anyone who has a donor card is a hero and everyone should have an organ donor card,” said Samantha. “To donate a kidney is the most rewarding thing you can do. Talk about it with your family, please.”

She said children’s cancer charity Aoibheann’s Pink Tie has helped them from their first time in hospital.

And how has Ella adapted?

“She is just amazing,” said Samantha. “She has got through it all. she smiles, she is a happy little girl, she is the best thing ever.”

Ireland innomin - April 4, 2020
0
UpdateThree men have been arrested by police in the North after two ATMs were stolen from banks in Dundalk, Co. Louth. The PSNI arrested...

Wales innomin - April 4, 2020
0
A motorcyclist died of his injuries at the scene of a crash with a bus at a junction in Cardiff Bay...

Motorcyclist dies of injuries at scene of crash with bus in...