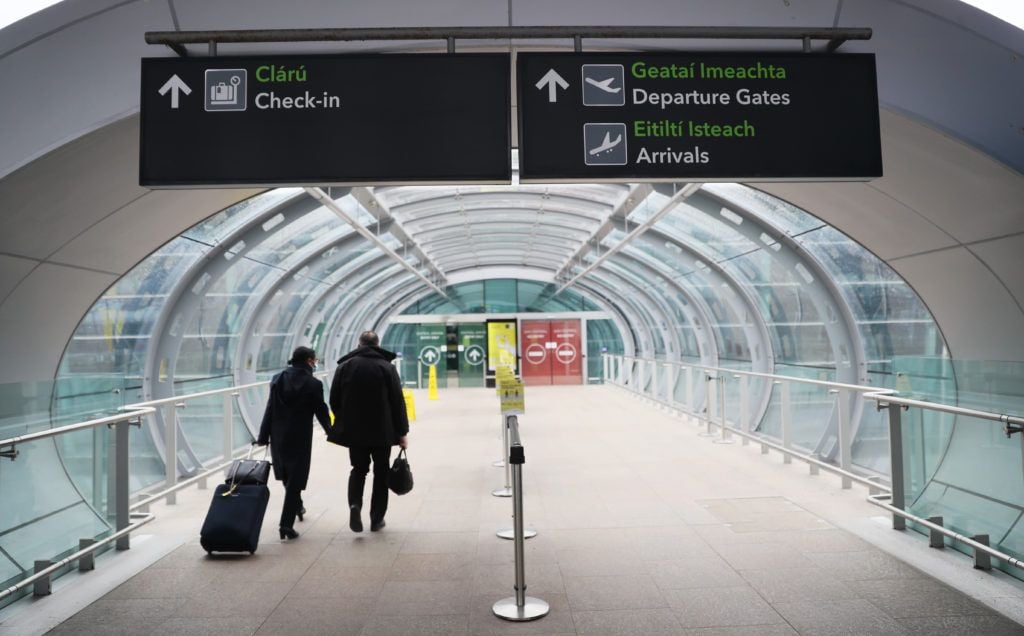 The number of people expecting to travel internationally this year has fallen dramatically since the onset of the third wave of the coronavirus pandemic.

Almost 16 per cent of the public now say they intend to travel abroad this year, but the figure has fallen sharply since Ireland entered its third lockdown in late December.

A new study by the Central Statistics Office (CSO) has also shown a people are broadly positive about taking the Covid-19 vaccine, with 87 per cent saying they would take it next week if available.

Almost nine in ten (87.0%) respondents yet to receive the COVID-19 vaccine said they would get vaccinated next week if it were possiblehttps://t.co/0vIqRp5gFK #CSOIreland #Ireland #COVIDIreland #Health #SocialImpact pic.twitter.com/5UKxIQtJ3g

In a February survey, fewer than one in six people, 15.7 per cent, said they anticipated their next international flight would be sometime in 2021.

That is compared to more than one in two, 50.6 per cent, who thought they would travel internationally this year when asked the same question in November 2020, prior to the onset of the third wave.

Almost three quarters of those asked, 73.3 per cent, said they would take a holiday overseas in a typical year prior to the onset of Covid-19.

People are more likely now to take a holiday of at least a week in Ireland than they were prior to the pandemic.

Almost two-fifths of respondents, 39.4 per cent, said they intend to take at least a week-long holiday in the Republic of Ireland in 2021.

That is compared to less than a third, 30.9 per cent, who said they had taken such a holiday before coronavirus arrived on these shores.

Of the people surveyed, those aged 35-44 were most likely to report staycation plans in Ireland, at 45.3%.

They were also the most likely group to report plans to travel overseas for at least a week’s holiday in 2021, at 17.4%.

More than a quarter of people, 25.8%, said they will not take a holiday at all this year.

That compares to just one in nine, 11.2%, who said they would normally not take any holidays in a typical year prior to the pandemic.

The study also examined the public’s attitudes towards coronavirus vaccines.

The results showed broadly positive attitudes towards taking the vaccine, with 87% of those who have not yet received it saying they would do so next week if it was available.

The most reported concern among those not yet vaccinated was having a long wait until they are inoculated, with 46.3% saying they were “very” or “extremely” concerned.

Some 21.3% said they were worried about the length of time they will be protected against Covid-19 by the vaccine.

And 20.7% said they were concerned about the effectiveness of the vaccine against different strains of the virus.

Only 5.4% of this cohort said they do not want to get the vaccine.

Women were four times more likely than men to say they do not want to get the vaccine, with 8.7% of female respondents saying that compared to 2.1% of men.

The most reported fear around the vaccine among those unwilling to take it was that they were “worried about long-term side effects”, with almost two-thirds, 66.2%, reporting that.

Ireland innomin - May 6, 2021
0
Spectators at sports events and the return of indoor dining in July are under consideration, as part of the Government’s plan to ease...

Senedd Election: How you can vote tactically in every region of Wales

Wales innomin - May 6, 2021
0
When you vote at the Senedd elections you have two boxes to tick - one for the constituency and one...

Voters head to polls in local elections 2021 on Super Thursday

Wales innomin - May 6, 2021
0
Voters are going to the polls for a set of elections which could shake up British politics and have profound implications...

Senedd Election: How you can vote tactically in every region of...

Voters head to polls in local elections 2021 on Super Thursday