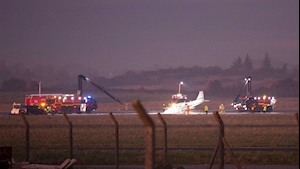 Update 6.50pm: The runway at Shannon Airport has reopened following an incident involving a light aircraft.

The airport confirmed that a light aircraft which experienced difficulty on landing at 16:28 has been successfully removed from the airport runway.

Following a clean-up of the area the airport runway reopened at 18.30.

Shannon Airport said it would like to thank its staff, the airport operators who assisted with this incident, and airport passengers for their patience.

A statement added that intending passengers are advised to contact their airline for flight updates.

Passengers on the Ryanair Wroclaw and Aer Lingus Heathrow flights to Shannon which were diverted to Cork earlier are now being transported by bus to Shannon Airport.

Operations have been brought to a standstill at Shannon Airport following an incident this evening involving a light aircraft.

It is understood that the plane suffered a collapsed nose-wheel shortly after landing at Shannon.

Airport fire and rescue crews responded quickly to the incident which occurred at around 4.30pm.

It is understood there was only one person on board the aircraft and that he has not suffered any injuries. He was able to vacate the aircraft safely.

Shannon Airport has confirmed the temporary closure of the airport runway due to a technical issue with a light aircraft.

Two flights, an Aer Lingus service from London and a Ryanair aircraft which was inbound from Wroclaw in Poland, have been diverted to Cork Airport.

Efforts are underway to clear the aircraft from the runway with a view to resuming operations as soon as possible.

Shannon Airport has confirmed that a light aircraft experienced technical difficulties on landing on the airport runway which led to the closure of the runway.

Permission has now been received to commence the process of removing the aircraft from the runway.

Once the aircraft has been removed from the runway, it’s expected that an inspection will be carried out to establish whether the surface of the runway has been damaged.

A Shannon Airport spokesperson said: “Shannon Airport has confirmed the temporary closure of the airport runway due to a technical issue with a light aircraft.

Wales innomin - August 8, 2020
0
People have been enjoying their first proper night out in Cardiff since March, after the reopening of pubs indoors in Wales.Photographs of Cardiff...

How Cardiff’s first Friday night out looked after the pubs reopened...