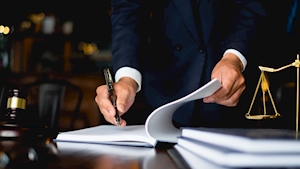 A married couple convicted of the female genital mutilation (FGM) of their daughter in the first case of its kind in the nation’s history have been jailed.

The couple both pleaded not guilty at Dublin Circuit Criminal Court to one count of carrying out an act of FGM on a then one-year-old girl at an address in Dublin on September 16, 2016.

The 37-year-old man and 27-year-old woman also pleaded not guilty to one count of child cruelty on the same day. They are both originally from an African nation but cannot be named to protect the identity of the child.

On the eighth day of the trial, the jury returned unanimous verdicts of guilty on all counts after almost three hours of deliberations.

At an earlier sentencing hearing, Detective Inspector Dany Kelly told Shane Costelloe SC, prosecuting, that on the date in question, the accused man attended at a hospital with his daughter who was bleeding from her perineal region.

Det Insp Kelly said the accused man gave an explanation that the child had sustained the injury by falling backwards onto a toy. Medical professionals were of the view that this explanation was not credible and that the injuries were not accidental, counsel said.

Gardaí were notified and carried out a search of the accused’s family home. They seized the toy claimed to be responsible for inflicting the injury and no blood was found on the item following a forensic analysis.

Dr Sinead Harty gave evidence during the trial that in her professional opinion, the injury sustained was not consistent with falling on a toy. She said the head and glans of the victim’s clitoris had been completely removed.

In interview with gardaí, both accused denied that FGM had been carried out on their daughter. The victim’s father said he did not agree with the practice. His wife said she had been a victim of a different form of FGM herself.

The court heard that the victim and her two siblings are currently in the care of their mother’s eldest sister.

The court heard expert evidence that FGM is a cultural phenomenon that goes back many thousands of years and arising predominantly from East Africa. Dr Deborah Hodes said it has no nothing to do with religious beliefs and is absolutely not a principal of the Muslim faith.

Speaking today after the case Chief Superintendent Declan Daly, Garda National Protective Services Bureau said today’s conviction sends a strong and important message that Female Genital Mutilation, the mutilation of children and young girls, is not and will not be tolerated.

“It is a heinous and barbaric practice which is a criminal offence in Ireland.

“Ireland has a long and proud history of embracing traditions and customs from abroad, however there can be no ‘welcome’ for any activity which brings harm to children.

“Our communities need to be vigilant and aware of this crime and anyone who suspects or believes a child is likely to be subject to Female Genital Mutilation either here or being brought outside the country for the purpose of Female Genital Mutilation, to contact their local Garda station, the Garda Confidential Line 1800 666 111 or call the Child Abuse Reporting line on – 1800 555 222.”

Dr Deborah Hodes, who helped set up a clinic in the UK which specifically tries to assist young women who have had FGM done to them, prepared a report for the court outlining the long term effect on the victim as a result of this act.

In the report, Dr Hodes sets out that FGM had nothing to do with religious beliefs or any form of religion. She said it was absolutely not a principal of the Muslim faith and nothing about being Muslim required FGM to be carried out.

Dr Hodes said FGM is a cultural phenomenon that goes back many thousands of years. She said it is not exclusively but predominantly arising from East Africa around the horn of Africa.

She confirmed that because of the nature of the type of FGM in this case, there will in the future be no physical effect on the victim’s urinary system, no obstruction to her vagina, no menstrual problems and there will be no effect on her ability to have sexual intercourse in the future.

The two accused came to Ireland in 2008. The woman is a naturalised Irish citizen, while the man faces a deportation order which is currently under review pending the completion of these court proceedings.

Both accused have no previous convictions. They have been remanded in custody since the date of their conviction by a jury.

Colman Fitzgerald SC, defending the father, said there are standard international classifications of FGM and that there are different categories of greater severity than the type in this case. He submitted this offence can be placed as not being the most serious kind of FGM.

Mr Fitzgerald said that in all respects, save for this act for which he has been convicted, his client had been a good, loving and caring father. He said there is no reason to believe his client is likely to be involved in criminality in the future.

He said when his client’s daughter was clearly in trouble, he brought her to hospital and made no attempt to try and wait it out. He said his client’s reaction, the fact that he went for help, is something that should go towards mitigation.

Patrick Gageby SC, defending the mother, said that his client is a married woman with three young children. He said that in all respects save this previous breach, his client appears to have been a very caring mother with well adjusted and healthy children.

Mr Gageby said there may be some irony in his client pleading that she is the mother of three small children in mitigation. He offered that courts have on occasion offered leniency to people in a position similar to his client.

He said this appears to be the first conviction under this statute. He asked the court to temper its public obligations with the requirement to visit a proportionate sentence on his client.

UK News innomin - February 28, 2020
0
Labour members commenced voting for their next chief this week as candidates continued to make their scenario for why they should really be...