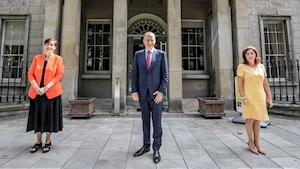 Schools are to “fully reopen” by the end of the August, Taoiseach Micheál Martin and Minister for Education Norma Foley have confirmed.

A plan on the safe return to the classroom is being published on Monday, after Ministers agree on it at a Cabinet meeting.

The Taoiseach confirmed the news after meeting with Ms Foley on Friday morning.

“We have a very comprehensive set of measures that will enable schools to open fully but also in a resilient and robust way,” he said.

Schools have been shut since March 12th, due to Covid-19.

Ms Foley said schools will be back to normal for the new term: “The objective is a full reopening of the schools. All students on campus, all teachers on campus.”

The Minister was also keen to address critics who said she has been absent on the issue.

“I’ve worked very closely with partners in education, with the support of all the officials here. We’re doing the work, much of it is unseen,” she said.

“When we produce the roadmap for the reopening of education, it will not go unappreciated.”

Mr Martin and Ms Foley rejected suggestions that union opposition delayed the plan, with both paying tribute to what they called the collective buy-in from all sides.

The reopening plan will include tens of millions of euro funding for structural alterations to classrooms and to improve bathrooms for hand-washing, along with daily cleaning and hygiene routines, according to The Irish Times.

In addition, enhanced supervision and substitution will be provided to cover an expected increase in teacher absences. This is in light of official guidance that states teachers with any symptoms should stay away from the classroom.

Man charged in connection with incident at anti-lockdown protest

Number of Covid patients in hospital drops 65% in one month

Wales innomin - March 3, 2021
0
An explosion has smashed windows at a coronavirus testing centre in a small town north of Amsterdam, police said. No-one was...

Wales innomin - March 3, 2021
0
Sickness absence from the workplace has fallen to its lowest level on record, new figures reveal. The Covid pandemic has helped...

Finances 2021 reside: Sunak states he will use ‘full measure of our fiscal firepower’...

Sickness absence from the workplace falls to its lowest level on...

Finances 2021 reside: Sunak states he will use ‘full measure of...