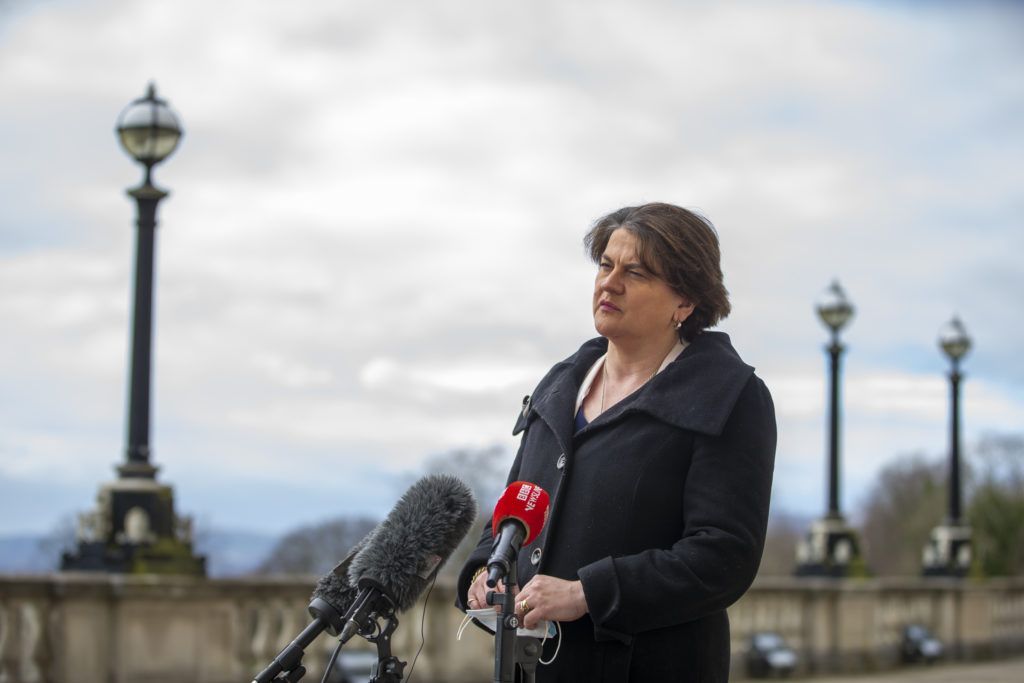 Arlene Foster has insisted a “cultural war” is being waged on unionists by republicans.

The DUP leader and Northern Ireland First Minister claimed genuinely felt concerns within the loyalist community were being “dismissed” and she denied that unionist political leaders who highlighted those concerns were stoking tensions.

Ms Foster made the comments as she and Sinn Féin Deputy First Minister Michelle O’Neill faced questions from MLAs in the North on the recent street disorder, which has predominantly flared in loyalist working-class areas.

The First Minister also expressed concern at any suggestion multi-million pound spending commitments by the Northern Executive in some of the areas impacted by the recent violence – through the Communities in Transition initiative – was an effort to buy off the rioters.

In the tweet condemning the hijack and destruction of a bus during disorder on the Shankill Road, Ms Foster suggested the incident would take the focus off the “real law breakers” in Sinn Féin.

She was making reference to the attendance of senior Sinn Féin members at a mass republican funeral last year when tight Covid-19 restrictions on public gatherings were in place.

On Wednesday Ms Foster was challenged on the remark by SDLP committee chair Colin McGrath.

The DUP leader suggested Mr McGrath was making “mischief” and insisted there was no question that the rioters were breaking the law.

“Of course people who riot, people who injure police officers, people who destroy their own communities, are breaking the law. That’s very clear for everybody to see,” she said.

Sinn Féin committee member Pat Sheehan told the hearing: “If people are going to voice concerns and concerns that might raise tensions, they should be supported with evidence, because the evidence doesn’t support what’s being said at times.

“I mean, the majority of deprivation and disadvantage is in nationalist areas yet somehow the perception is that it’s not.

“There does need at times to be a bit of honesty.”

Responding to Mr Sheehan’s comments, Ms Foster said: “The idea that there’s no cultural war on unionism from republicanism is for the birds, frankly, when you look at the evidence.

“The idea that there’s no culture war against unionism, it’s just not factually right.”

Ms O’Neill suggested many of the claims from within loyalism were perceptions rather than grounded in reality.

The Sinn Féin vice president reiterated her view that some political leaders were “whipping up fears and tensions” in the region.

“Let’s work together in terms of ensuring that we reach out to those harder to reach perhaps young people or communities that in any way feel isolated or don’t feel the benefit of where we are today, because that’s something that we all should be concerned about,” she said.