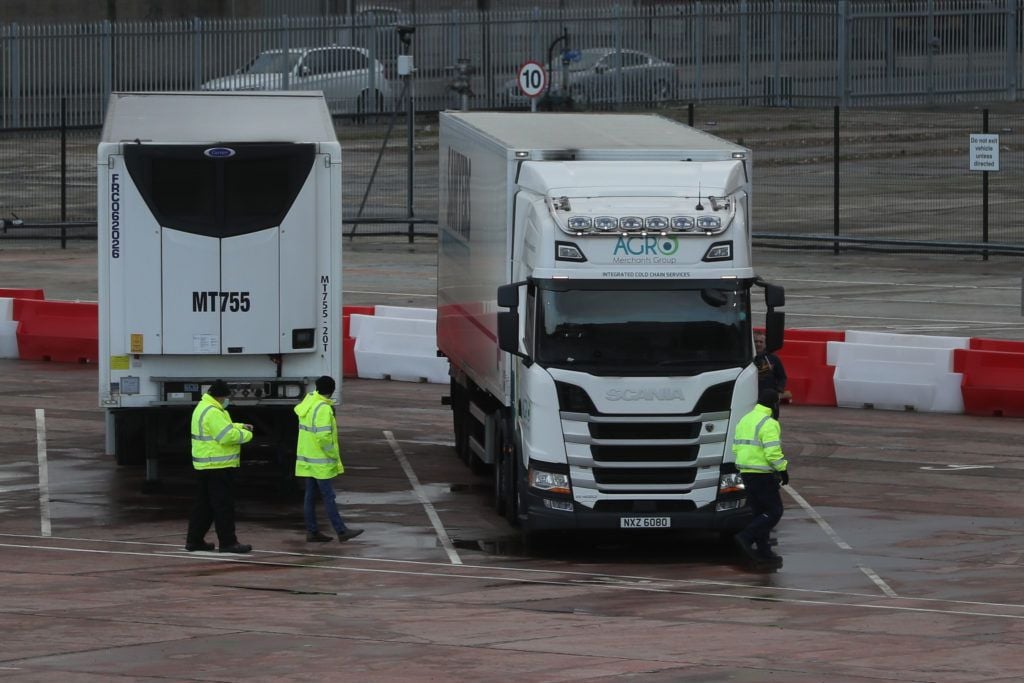 A 12-month grace period and urgent financial aid is needed to iron out problems with the post-Brexit Irish Sea trade border, hauliers said.

It is quicker to send goods between Northern Ireland and Spain than from the rest of the UK, they added.

The industry has warned that the UK government must intervene with extra cash before jobs are lost at freight companies.

The end of the Brexit transition period has produced deep-seated structural problems which will not be quick to resolve, the Road Haulage Association (RHA) said.

Volumes of trade from the rest of the UK to Northern Ireland has fallen sharply and many suppliers are avoiding the route. Dozens of lorries have been left sitting in yards in Britain.

“There needs to be financial intervention immediately.”

New customs declarations were taking 12 hours, when hauliers were promised it would take 30 seconds.

Some drivers who can depart Irish Sea ports are having to produce 300 pages of paperwork, the transport firms added.

Dozens of staff helping with red tape are off sick because of coronavirus, the industry said.

Some freight companies are seeing a third of business disappearing, Mr Burnett added.

He warned: “There are going to be jobs lost, that is the bottom line here.”

He said issues encountered since the end of the transition period were not teething problems.

“These are significant structural issues. Government needs to intervene quickly with financial support to address this issue.”

I know we are insignificant to you in Great Britain

“The trade imbalance cannot be maintained, it is not unfettered access.

Another haulier, Paul Lutton, addressed a virtual meeting organised by the UK Labour Party on Wednesday.

He said: “I know we are insignificant to you in Great Britain, we are only a small town but we want to be part of Great Britain.

UK records its deadliest day of the coronavirus pa…

“You have said you can be, you are not helping us out.

The delays are caused by the post-Brexit Northern Ireland protocol, which means the region must follow the EU’s customs rules to prevent a hard Irish border.

Louth man jailed for his role in 2018 Drogheda abduction

Ireland innomin - March 5, 2021
0
Three police officers have been injured as their car was rammed by a lorry in south Armagh. It happened during a joint enforcement operation...

Ireland innomin - March 5, 2021
0
More than 600,000 coronavirus vaccine doses have been administered in Northern Ireland. The total is significantly ahead of the schedule followed by planners of...

More than one million people in UK are now fully vaccinated...