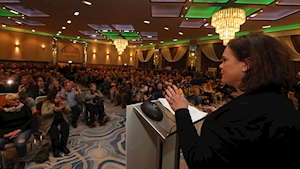 The Sinn Féin leader, Mary Lou McDonal, has rejected suggestions that her party’s public rallies this week are “an affront to democracy.”

Taoiseach Leo Varadkar hit out at the party’s rallies yesterday and said that they were a campaign of “intimation and bullying”.

The Taoiseach also said that Sinn Féin are “more interested in rallies” than seeking to actually form a government.

Ms McDonald pushed back however and said Mr Varadkar and those criticising the rallies are just worried about change:

“I think all of this overreaction is just symptomatic of a political establishment now that sees change coming and is trying to push it back.

“I think that is a fruitless exercise. I think people should embrace the fact that the citizens now are hugely engaged with politics.

“They have identified for political system the core social issues that need to be addressed.”

The Dublin Central TD also said that the Taoiseach’s comments about Sinn Féin’s rallies were “completely over the top.”

Ms McDonald believes that now is the time for working together instead of being defensive.

“Rather than being defensive or worse being abusive towards those of us that have a mandate for change,” she said.

Describing last night’s meeting in Cork City as “absolutely packed,” McDonald believes that attendance will be at similar levels “right across the country.”

Speaking at the rally in Rochestown Park Hotel, Ms McDonald said gardaí have been alerted to threats made against her.

Almost 1,000 people attended the rally yesterday while a second is to take place in Dublin tonight.

Meanwhile, Fianna Fáil leader Micheál Martin meets the Taoiseach today to discuss whether there is a basis for talks on forming an historic grand coalition between the two old rivals.

Ireland innomin - April 2, 2020
0
Over 500,000 people are now claiming social welfare supports as workers all over the country lose their jobs or face swingeing pay cuts.Latest...

Wales innomin - April 2, 2020
0
An NHS nurse hit the headlines after she was left in tears by Aldi customers who complained about her using an...

Ireland innomin - April 2, 2020
0
A vulnerable woman with a chronic incurable illness remains detained in hospital because the HSE has so far been unable to find a...

Aldi manager speaks out about the humiliated nurse who was mocked...