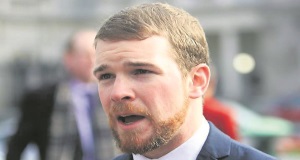 The plight of almost 4,000 homeless children who will have Santa arrive to them in emergency accommodation has been raised in the Dáil.

But the Taoiseach has defended Housing Minister Eoghan Murphy by claiming some people “are always angry” no matter what the Government does.

The Dáil was told of a woman from Cork who is six months pregnant and was forced out of her private rented accommodation after the landlady said the neighbours wouldn’t like the noise of a crying baby.

Raising the incident, which was first reported in The Echo, Sinn Féin TD Donnchadh Ó Laoghaire said this was not an isolated case.

He said: “Can we even begin to imagine the stress that kind of heartlessness would have had on that woman? I refer to the worry and the anxiety caused to her. She is far from alone.

“Threshold states this is not an isolated case and provides an account of another incident of a pregnant woman living in private rented accommodation where a new baby was not wanted by the landlord. That woman ended up moving into homeless accommodation with her newborn baby,” said Mr Ó Laoghaire.

Leo Varadkar said he was glad to hear the landlady in question had been fined as he said pregnancy, or having a child, is not grounds for eviction.

It comes after the Government survived a motion of no-confidence in Mr Murphy by 56 votes to 53.

The motion was defeated by just three votes on Tuesday night and with Independent TDs Noel Grealish, Michael Lowry, and Denis Naughten supporting the Government.

Highlighting the 10,514 people who are are homeless, Mr Ó Laoghaire said that children will wait for Santa in bed and breakfasts and emergency accommodation this Christmas.

“Last week, I met people who have spent 13 years and 17 years on the housing waiting lists.

“A whole generation of people has no prospect of owning homes,” he said.

Mr Varadkar said that there has been a “dramatic turnaround” when you compare the current supply is compared to the rate of housing supply just three years ago.

“We need to build on that to make sure we continue to increase the supply of housing. That is how we will get on top of this crisis.”

“People are always angry with the Government about the problems faced by their country,” Mr Varadkar told the Dáil.

Mr Ó Laoghaire repeated calls for the introduction a rent freeze given the housing and rental crisis.

UK News innomin - January 29, 2020
0
Escalating quantities of homeless households and the escalating price of putting them up in bed and breakfast inns brought about two-thirds of English...