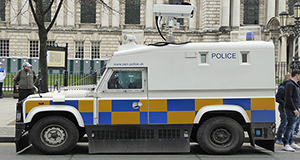 Police officers in the North have been hurt after being attacked with petrol bombs and bricks in west Belfast.

At least 26 officers were injured at Distillery Street as workers removed material from a bonfire pyre for the anniversary of internment without trial.

PSNI Superintendent Melanie Jones said officers came under “sustained attack” by a large crowd of youths throwing petrol bombs, masonry and other missiles towards them.

She said: “At this point we can confirm that at least 26 officers have sustained injuries and are currently receiving treatment.

“Footage from evidence-gathering cameras will be reviewed and all efforts will be made to identify those involved in the completely unacceptable violence we have seen here today.

“People who choose to engage in criminal and anti-social behaviour must understand it is unacceptable and must stop. People have a right to live in peace and to feel safe in their communities.”

Northern Irish Justice Minister Naomi Long and the Police Federation have criticised the attacks on officers.

The Police Federation tweeted: “It is disgraceful that officers going about their work and serving communities should be targeted like this. 26 officers were injured in sustained petrol bomb & masonry attacks – a terrible tally. Our thoughts are with them and other colleagues.”

Ms Long responded: “Absolutely disgraceful conduct. Officers should not face this kind of violence as they try to keep people safe. Residents are sick of this nonsense every year – they want peace and quiet I hope that no-one was seriously injured and that they all make a full and speedy recovery.”

Previous years have seen bonfires lit in Belfast to mark the anniversary of internment without trial on August 9th, 1971. This controversial policy saw thousands of mostly nationalists detained.

Last year a standoff developed between young people and police in the New Lodge area of north Belfast.

This weekend, police moved into a number of areas of Belfast to facilitate workers removing wood gathered for bonfires, while community talks prevented other pyres being built.

60% increase last month in number of overseas visitors to Ireland

Wales innomin - September 28, 2020
0
A new law brought onto force on Monday means people who risk spreading coronavirus can be fined up to £10,000. Police...

David James warns of ‘lost generation’ except if grassroots football gets...