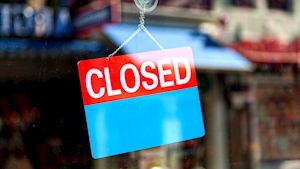 Over 50,000 restaurant staff in Dublin are set to lose their jobs this weekend after the new Level Three restrictions came into effect last night, according to the Restaurants Association of Ireland (RAI).

It says members are worried that looming bank repayments could force business owners to close forever.

The RAI also believe the Pandemic Unemployment Payment (PUP) should be increased back to the level it was at in March.

Chief executive, Adrian Cummins is calling on the Government to extend the moratorium on bank repayments.

“The banks will start to look for their mortgage repayments. The moratorium finishes in September, after six months and we are looking for the Government to intervene immediately and extend it for another six months so that these businesses won’t have the pressure of paying loans, or landlords looking for rent while we are closed.”

Under the new restrictions in Dublin, all bars and restaurants must close unless the have outdoor seating areas or are serving takeaway food.

The restrictions have been imposed for the next three weeks.

In the wider tourism and hospitality industry, there are also fears of more job losses according to the Irish Hotels Federation.

It says the industry has become “the economic frontline” of the Covid-19 crisis, adding that 100,000 jobs have been lost in the sector since March and a further 100,000 are now at risk.

The Federation’s president, Elaina Fitzgerald Kane says the industry has been disproportionately affected by restrictions.

“68 per cent of clusters came from private homes, but in the context of restaurants it was 0.0002 per cent and it’s for that reason that we feel it’s a real disproportionate impact.

“But at the end of the day, public health is number one. We all want to support the measures.”

Highest number of Covid patients in hospital since May

More than 3,000 fines and warnings issued over NI Covid regulations

How the DWP can monitor your bank accounts and social media in the run-up...

Wales innomin - October 26, 2020
0
The Department for Work and Pensions (DWP) is on alert against benefit fraud as the pandemic continues to hit the economy....

Ireland innomin - October 26, 2020
0
Gardaí have said that three men have been found dead at a home in Kanturk, Co Cork. At 6.30am this morning Gardaí in Kanturk...

Ireland innomin - October 26, 2020
0
724 new cases of Covid-19 have been reported in Northern Ireland in the past 24 hours. Five additional deaths have been confirmed by the...

How the DWP can monitor your bank accounts and social media...