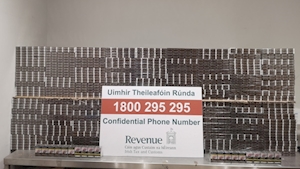 Over 234,000 cigarettes were seized at Dublin Airport yesterday.

Revenue officers discovered the cigarettes as part of routine profiling.

The cigarettes were branded ‘Benson & Hedges’ were found concealed in 17 boxes which were described as ‘metal transistors’.

The boxes had arrived via Amsterdam on a flight from China.