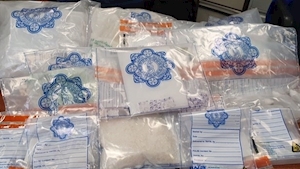 One man was arrested as gardaí seized €100,000 worth of drugs in Dublin.

Members of the Store Street Divisional Drugs Unit assisted by Revenue Customs Officers seized approximately €100,000 worth of controlled drugs following search operations carried out in the Dublin 8 area on Monday.

Cocaine, methamphetamine and GHB (Gamma-hydroxybutyrate) worth approximately €60,000 was discovered and seized after two apartments in Dublin were searched on Monday.

A man, aged in 40s, was arrested. He is currently detained at Store Street Garda Station under Section 2 of the Criminal Justice (Drug Trafficking) Act 1996.

Analysis of a seized mobile phone alerted gardaí to a package due to be delivered to Ireland from the UK today. Revenue Customs Officers were notified and a package containing €40,000 of methamphetamine was intercepted and seized.

The seized drugs have been sent for analysis.

The Kymin in Penarth could be sold off and turned into a restaurant or...

Wales innomin - September 20, 2020
0
The Kymin in Penarth, a popular wedding venue and erstwhile community centre, could be sold off and turned into a restaurant...

UK News innomin - September 20, 2020
0
Leicester continued their vibrant start to the season by ruthlessly exposing the limits with which Sean Dyche have to cope at Burnley. While...

How fresh air was used to stop TB spreading in schools as shown in...

Wales innomin - September 20, 2020
0
During the coronavirus pandemic we have all been encouraged to spend as much time as possible outside. This is because...

The Kymin in Penarth could be sold off and turned into...

How fresh air was used to stop TB spreading in schools...