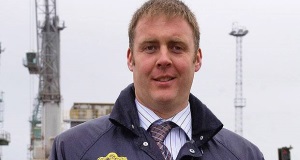 Inspector Darren Kirwan told Lorcan Staines SC for the prosecution that at 21.45 on January 25, 2013, he became aware that Det. Gda Donohoe had been shot and he immediately went to the deceased’s home to visit his wife Caroline Donohoe, who is also a garda.

Insp. Kirwan said he had known both Caroline and the deceased for 17 years and he described Det. Gda Donohoe as a “close friend” as well as a work colleague.

He said Mrs Donohoe wanted to visit the scene and at 11pm that night she identified her husband’s body as it lay in the credit union car park.

Aaron Brady (aged 28) from New Road, Crossmaglen, Co Armagh has pleaded not guilty to the capital murder of Det. Gda Donohoe (aged 41) who was then a member of An Garda Siochana on active duty on January 25, 2013, at Lordship Credit Union, Bellurgan, Co Louth. Mr Brady has also pleaded not guilty to a charge of robbing approximately €7,000 in cash and assorted cheques on the same date and at the same location.

Jane Murphy BL read a report by former Deputy State Pathologist Dr Khalid Jaber. Counsel told the jury that Dr Jaber carried out a post mortem on the deceased at Our Lady of Lourdes Hospital in Drogheda, Co Louth on January 26, 2013.

Dr Jaber identified “extensive damage to the brain and skull” and said the cause of death was a “penetrating shotgun wound the the face (head).”

He attached an ECG machine but found no cardio activity. He told Mr Staines that the injuries Det. Gda Donohoe had sustained were “inconsistent with life” so he assumed death had taken place.

Leona White told Mr Staines that she was driving on the Carlingford to Dundalk Road that night when she heard one loud bang which she knew was a gunshot because she lives near a gun range.

As she approached Bellurgan National School, which is across the road from Lordship Credit Union, a woman standing in the road flagged her down.

She seemed stressed and emotional, Ms White said, and didn’t make sense at first but she told her there had been a robbery and somebody had been shot dead.

Christina Birch told Mr Staines that she was driving with her husband Paul in the passenger seat and when they passed Lordship Credit Union they noticed a car parked over the entrance of the car park and heard two “large bangs”.

She thought it unusual so she pulled in to see what was going on. The car at the gateway of the credit union was not small or big, it might have been a hatchback and was “bigger than a Golf” and dark-coloured, she said.

Ms Birch called 999 while her husband watched what was happening through the car’s rear window. She told gardaí that a robbery was taking place.

Her phone records showed that she made the call at 21.29.

Paul Birch told Mr Staines that he noticed a car stopped across the entrance to the credit union car park and thought it “unusual”.

He heard two loud bangs which his wife said were shotgun noises. When they pulled in he looked back towards the credit union and saw someone jumping over the car park wall.

The car that had been blocking the car park entrance then drove off at speed in the direction of the Ballymascanlon roundabout.

The witness got out of the car and went to the car park where he saw a man he now knows as former Detective Garda Joe Ryan who was “agitated” and told him someone was dead. Mr Birch then saw the body of Det Gda Donohoe.

The witness agreed with Justin McQuade BL for the defence that in his statement to gardaí he said his wife identified the loud bangs as “gunshot” rather than a “shotgun”.

Christine Ivers told Mr Staines she was at her sister’s house three doors up from Lordship Credit Union that night. She was on the phone to her husband at 21.27 when she heard “two loud noises”, the first louder than the second.

She didn’t know if it was a car accident or what had happened but decided to wait in the house. A short time later she heard sirens as emergency services arrived.

Garda Rachel Copperthwaite told Mr Staines that she heard a call from Garda Joe Ryan on the Tetra radio system at 21.30 and went immediately to Lordship Credit Union.

She saw Det. Gda Donohoe lying on the ground on the passenger side of an unmarked patrol car.

She could see he had sustained a serious injury to the side of his face and she knew immediately he was dead. Det. Gda Ryan told her that he had been shot.

Garda Finbar Gurhy said he was watching for suspicious vehicles as he approached Lordship in response to a call for assistance by Det. Gda Ryan.

He said the call from Det. Gda Ryan was “a very distressed call with an urgency about it and panic in his voice.”

He saw nothing unusual on the journey. When he arrived at Lordship Credit Union he saw Det. Gda Donohoe lying on the ground with what appeared to be a gunshot wound to the head.

The trial continues in front of Justice Michael White and a jury of eight men and seven women.