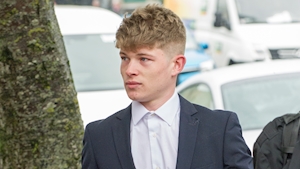 The son of celebrity chef Rachel Allen was remanded in custody today for a drug-dealing offence at the Ballymaloe Cookery School.

The sentencing judge referred to unimpressive probation reports, claiming: “Now we have to push the nuclear button.”

Earlier this year Joshua Allen, with an address in Ballinmona, Shanagarry in Co Cork, pleaded guilty to drugs possession charges at Ballymaloe Cookery School in Shanagarry, Co Cork on August 30, 2018 and of having the €22,000 worth of cannabis, delivered in a parcel, for sale or supply.

The crime carries a mandatory minimum sentence unless the judge finds there are exceptional circumstances.

Today at Cork Circuit Criminal Court he was remanded in custody until November 29, with Judge Seán Ó’Donnabháin saying of probation reports: “On any standards the reports are not impressive to date. Now we have to push the nuclear button.”

The judge indicated he would consider defence senior counsel Siobhán Lankford’s suggestion that the accused would go into residential drug treatment on November 29. Otherwise, the 19-year-old could be remanded in custody for further consideration of sentencing until the next sessions of the circuit criminal court which do not commence until February 2020.

The judge said: “Coming before the court with a probation report like that only gives me one option.” The contents of the report were not disclosed in court.

Since embarking on drug treatment there was evidence of Mr Allen relapsing on a number of occasions, but Ms Lankford said a senior drug counsellor said such relapses were not unusual.

Judge Ó’Donnabháin said: “This lad has not matured in the manner I would expect or require of someone coming before the court on such a serious charge.

Ms Lankford said: “It is evidence of clear immaturity. He left school at 15.”

Detective Sergeant Michael O’Halloran said gardaí were contacted by customs officers about a suspected parcel of drugs at the postal sorting office in Portlaoise.

A controlled delivery was made at 4.30pm on August 30, 2018, to Joshua Allen with an address at Ballymaloe cookery school. He was 18 at the time he signed for it.

Joshua Allen told gardaí this was his third or fourth time getting such a delivery of cannabis through the post. He said it was from a lady in California whom he had met in East Cork. Rather than paying her by Western Union, which he felt could be traced, he travelled to London to pay her €2,000.

Ms Lankford SC said in mitigation: “He had no previous convictions. He co-operated with gardaí when interviewed. Never before has he come to the attention of the courts.”

She said since April he had been volunteering in helping with homeless services.