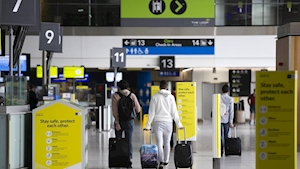 Passengers coming into Ireland from non-green list countries could avoid quarantine, if they pass a Covid-19 test on arrival.

As reported by the Sunday Times, the government is looking to introduce rapid testing at airports as part of its new long term ‘Living With Covid’ plan, which’s to be announced on September 14th.

HIQA is currently reviewing rapid-testing kits that can produce results within hours, with a view to having them at ports and airports by the end of the month.

Professor Sam McConkey from the Royal College of Surgeons says it is important the kits are accurate enough:

“False negatives tests are a reality of diagnostic testing and screening of every healthcare systems, there is nothing you can do to change that.

“So that is going to mean that there will be some false negatives and people will come into the country and walk around.

“We need to measure that, so if that was only 1 out of 100 then we can handle that, but if it is 50/50 false negative than that test would not be adequate. So it depends on the detail performance characteristics.”

Last month, details of a Government plan to introduce “randomised” testing for Covid-19 at airports were uncertain weeks after it was first announced, as a surge in cases has led to other measures being introduced to curb the spread of the virus.

The Government announced passenger locator forms would go electronic and increased follow up calls for arrivals into the country were also confirmed.

Ireland has continued to pursue a pandemic travel policy separate to the EU, remaining open to international travel while asking all travellers to quarantine for 14 days upon arrival. Concern has surrounded anecdotal reports of holidaymakers from countries with high rates of Covid-19 arriving in the country and failing to quarantine.

Wales innomin - October 20, 2020
0
A dying woman was "unable to choose" which of her children should visit her due to the coronavirus pandemic, a charity...

Dying mother ‘unable to choose’ which child should visit her due...