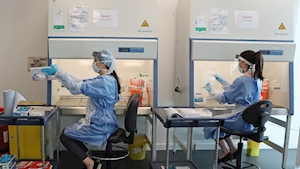 There have been no further deaths and 45 more confirmed cases of Covid-19 recorded in the Republic, the National Public Health Emergency Team has said.

Meanwhile in Northern Ireland, eight more positive cases of coronavirus were detected over the weekend, the North’s Department of Health said. The total number of people who have been infected there is now 5,996.

No new deaths were recorded, leaving the total in the region at 556, according to official figures.

The news comes as Tánaiste Leo Varadkar said the Government will be adopting a “cautious” approach to relaxing further Covid-19 restrictions over the next two weeks, which will be a “further blow” to some sectors that will not be allowed to reopen.

Mr Varadkar was speaking ahead of a Cabinet meeting to decide whether the country will proceed to phase four of the so-called roadmap to reopening society and business.

Pub owners are saying the decision is “make or break” for their businesses and many will not survive if they are prevented from reopening. Pubs without a licence to serve food have now been closed for more than 140 days.

The Cabinet will also discuss indoor and outdoor gatherings, and whether to remove Malta and Cyprus from the travel green list.

UK News innomin - March 4, 2021
0
Nicola Sturgeon has claimed she will “get on with the job” of steering Scotland out of the coronavirus pandemic, as she accused opposition...

Ireland innomin - March 4, 2021
0
The UK has confirmed it is extending the Irish Sea border grace period for parcels. The British government has defended its unilateral decision to...

Martin Lewis grills the Chancellor on companies who aren’t acting fairly over furlough for...

Wales innomin - March 4, 2021
0
Martin Lewis cleared up more money worries for viewers in the UK tonight (Thursday) when he grilled the Chancellor of the...